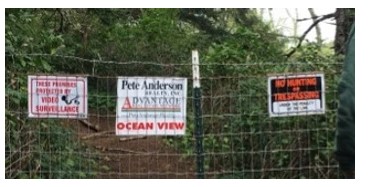 The natives are growing restless in Manzanita.
The Classic Ridge Trail Access Committee has launched a petition that demands that the Tillamook County Board of Commissioners remove a fence that a pair of disgruntled property owners erected on April 23, 2020.
The barrier on the Doris Davis Trail startled and enraged many residents of the Classic Ridge and surrounding communities in Manzanita and surrounding neighborhoods, including Neahkahnie, an unincorporated part of Tillamook County.

For more than 40 years, residents, primarily in Manzanita, have come to rely on the trail for leisurely hikes to and from the beach, for bird- and wildlife-watching, or to simply enjoy a walk in the woods.

On a sun-washed April afternoon, the owners (which are named in the petition) decided to build an ominous-looking fence, complete with No Trespassing signs and surveillance cameras, to prevent the people of this coastal community from hiking the Doris Davis Trail. 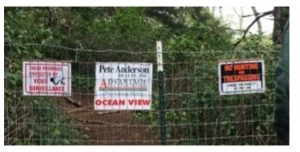 The trail is a dirt path that runs into the woods, from University Avenue to Beach Street.


The Classic Ridge Trail Access Committee was formed in late April and is run entirely by volunteers who live and own homes in Classic Ridge and adjacent neighborhoods.
The City of Manzanita said it is unable to do anything to resolve the matter, since the trail exists solely in unincorporated Tillamook County.
The Access Committee has long argued that reopening the Doris Davis Trail is a matter of public safety, since the trail provides an important escape route in case a tsunami were to occur.

We the undersigned are petitioning the Tillamook County Board of Commissioners, asking that they restore access to the Doris Davis Trail by tearing down the fence, a surveillance video camera, and other ominous barriers that were erected April 23, 2020.

It is an assault to the senses and has enraged Manzanita’s Classic Ridge community, where more than 200 households have been denied direct beach access, though the trail has been accessible, without complaint, to the public for the past 40 years.

In a community that prides itself on being welcoming, we demand that these two property owners – Rodney and Maralene Oullette, and Roy and JoAnn Simmons – tear down the wall.

The trail, which exists solely in Neahkahnie, an unincorporated part of Tillamook County, is a dirt path that runs from through the woods, from University Avenue to Beach Street. It enables beach access and allows the residents of Classic Ridge the ability to escape a tsunami.

The trail is not simply in the public interest. It is vital to ensure public safety.

To that end, we strongly encourage the Tillamook County Board of Commissioners to instruct the Oullette’s and Simmons’ to remove the fence and allow public access again.