It seems to me that in some years certain plants are more abundant than in other years.  Last summer for example seemed to be a bustin’ berry year.  The proliferation I have noticed in my Bayside neighborhood this year is Skunk Cabbage (Lysichiton americanum).  Not only are there more where I usually see them in the wetlands near my house, I also discovered them in places where they have never been in my 17 years here!  Skunk cabbage emerges in my neighborhood in January, heralding its showy hooded yellow flower soon after.  It’s on its way out now and it is the odor it produces at this time that gives it its name.   It is found in wet areas at low to middle elevations. 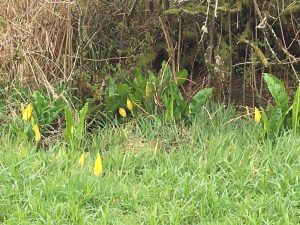 Here is a Kathlamet story related in Haskin 1934 from “Plants of the Pacific Northwest Coast” by Pojar and Mackinnon.  ‘In ancient days, they say, there was no salmon.  The Indians had nothing to eat save roots and leaves. Principal among these was the skunk-cabbage.  Finally the spring salmon came for the first time.  As they passed up the river, a person stood upon the shore and shouted: “Here come our relatives whose bodies are full of eggs!  If it had not been for me all the people would have starved.”  “Who speaks to us?” asked the salmon. “Your uncle, Skunk Cabbage,” was the reply.  Then the salmon went ashore to see him, and as a reward for having fed the people he was given and elk-skin blanket and a war-club, and was set in the rich, soft soil near the river.’  Pojar and McKinnnon go on to say that the leaves were used as ‘Indian wax paper’ for lining baskets, drying racks and steaming pits.  They only ate skunk cabbage in times of famine in early spring by steaming or roasting. 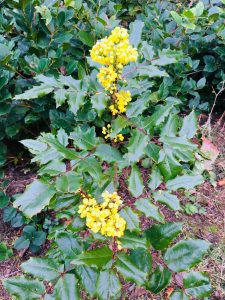 There are two varieties of Oregon Grape, Mahonia nervosa and Mahonia aquifolium, the latter our state flower.  (Other taxonomy names the genus as Berberis instead of Mahonia.) They both have holly like, shiny leaves growing on opposite sides of a leafstalk and yellow flowers that ripen into edible, sour, blue-black berries that resemble grapes in early fall.  Their leaf structure is called pinnate, from the Latin word pinnatus, meaning feathered.  Another example of this structure is sword fern.  Oregon Grape leaves start out bronze as they emerge, turn bright green and then red and burgundy in the fall.

The one growing near me is Aquifolium which is taller than Nervosa, growing up to six feet and has less leaflets.  Oregon Grape has many medicinal uses.  According to the National Parks Service website https://www.nps.gov/articles/000/oregon-grape.htm  “Native American tribes of the Pacific Northwest have used preparations from Oregon grape roots to treat stomach problems, hemorrhages, arthritis, and tuberculosis. Berberis species have long been used in Traditional Chinese Medicine to treat a variety of problems, including tuberculosis, dysentery, eczema, and wounds. Western medicinal uses for berberine, a compound derived from Berberis, include blood sugar stabilization, and studies show that it kills amoebae and can be used to treat giardia infections.”

From my dear herbalist friend I get a tincture that includes Oregon grape that I swear by and taken at the first sign of a cold or general icky feeling.

Given the cold weather this week, I am glad I have some on hand!