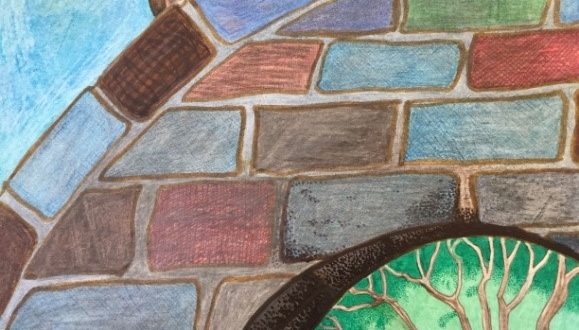 ~ Lynn St. Georges dedicates this essay to all the helpers “in these times” – the grocery store workers, the gas station attendants, the restaurants, the drivers and farmers and laborers. Thank you for helping us all through this.
By Lynn St. Georges

Suddenly I’m deemed essential.
After being caught in a reduction of the workforce at 61 years old from a well-paid professional job of 10 years, and after two years of silence and/or rejection from potential employers, I was hired one year ago. It didn’t matter that the position was part time or as a low-paid hourly employee. It was a damn job.
Then along comes the coronavirus and the global/national/state/county shutdown.
I work in health care, albeit in a clerical role. People still get sick and people still die and we continue to go to work.
I’m essential and whereas it’s a bit frightening to trundle out when most are safely locked indoors, it’s also an honor to be a helper “in these times”.
Me … a helper. I never saw that coming.

I’m a strong empath, which means I take on the hurt of others near me and the whole world, too. I can’t help it. I’ve gotten better at recognizing when I’m too close and literally step backwards, like the time at the vet when a stranger came in holding her old Corgi and was telling the receptionist that it was time … she thought … but maybe not … but the ancient dog was hiding now and not eating … but maybe it was or wasn’t the time … and I started to cry and put physical distance between us, literally stepping back.


Social distancing to protect my heart. It’s a thing empaths do when/if we recognize and see the danger in time. It’s also typically not a strong suit for those who feel the world’s hurt.
Balance has never been a strong suit for me. It’s the part of being a Libra I most relate to … constantly seeking balance that is never found.
The night we learned John Prine succumbed to this virus, I also learned a high school classmate’s husband “died from complications of COVID-19”, something she had survived. Living on the edge of this continent, it had been an abstraction and something that consumed the news, but it wasn’t yet personal. I had spent part of that same day wondering if anyone I knew had some degree of contact with the suffering from the virus. Then my classmate’s husband and John Prine.
We lost John Prine!!
Why did that one hurt so badly? Why was that death, combined with the news about my classmate, the day when I broke? I spent the next day at work wishing I was home in a fetal position sobbing. I’ve never spent so many hours holding back not tears, but sobs.
I considered seeking out a counselor, even though I knew what I had to do – “Blow up your TV, throw away your paper”* – but who knew that John Prine would show me the way?
I still watch the news and I still read the daily paper and weekly newsmagazine. I always have and don’t expect to stop now. And yes, I’m still on social media, but I’m learning when to scroll past something. If there’s an image of a health care provider in full PPE with tears, I’m scrolling faster than possible. Visually viewing human suffering has been banned when possible. I limit my time on Twitter, which I call the rage machine.
I still cry every day, but honestly, how can we not? We cry for what we lost, we cry for what we read/see/hear, we cry for our neighbors and our counties and our states and our country and our world.
And those of us lucky enough to be essential, well, we’re the helpers. And that knowledge means everything.

* From “Spanish Pipedream” by John Prine