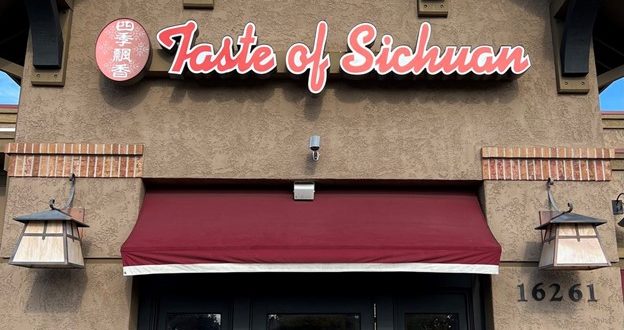 EDITOR’S NOTE: Trips to the valley are often accompanied by a stop for particular foodie treats. The Ardent Gourmet introduces us to a great option, conveniently just off Hwy. 26 at the Cornell/Bethany Blvd. exit. Enjoy the Ardent Gourmet’s excursion through a variety of dishes.

It is a strange fact that the very best Chinese restaurants – the kind you seek out – serve food that repulses you.

You once visited a restaurant in Shanghai that had Crocodile on the menu. It wasn’t Cashew Crocodile. It wasn’t Kung Pao Crocodile. Nor Croc Nuggets. Just Crocodile. You didn’t have the courage to order it. Knowing Chinese restaurants in China, it might well have been a live crocodile that you were supposed to eat like corn-on-the-cob. Or maybe the crocodile was supposed to eat you like corn-on-the-cob. Hard to know in a country where foreigners’ eating habits can be as hilarious to locals as a barrel of monkeys (which were probably on the menu too). This restaurant also served Camel Hump. No particular rendition of camel hump like Camel Hump Casserole or Spaghetti with Camel Hump Sauce, just Camel Hump. You imagined ten men carrying it in on a platter, staggering under the weight, slipping on a noodle, and dropping it on your head. How ironic this would have been if it had happened on a Wednesday – hump day. You didn’t order it.

Crocodile, Camel, Intestines, Stomach, Frog, Jellyfish, blood, much as they repulse you, are good. Why?  Because they’re validators. They say that this restaurant does not pander (though Pander Bear might be on the menu). We don’t dial down our food for feeble, timid, dull palates.  We cook the real thing the real way, the way our forebears did, and if you don’t like it, begone.

Which means that though you may not eat those particular dishes, there’s a good chance that other dishes on the menu made from ingredients you do like will be great, cooked to the highest standards with no compromise, no dilution, no dumbing down. As was the case in Shanghai.

Pot-stickers are one of humankind’s pinnacle achievements. They show that for all our shortcomings, God has endowed us with the means for greatness. They are typically ground pork and cabbage wrapped in dough, first boiled, then, when the water boils off, seared on one side. Popularity has been their ruination though. They sell these frozen now, in bags, at grocery stores, stamped out by machines.  Commonly the dough is pre-made wonton wrapper. And too often they’re deep-fried, just dumped in the hot oil. Disgraceful! 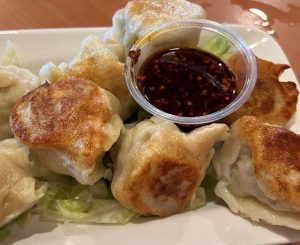 Taste of Sichuan goes old school (you don’t think they could do new school if they tried). The wrapper — handmade starting with flour and water – was gratifyingly thick and chewy. The interior was fresh, artfully blended, not yesterday’s scraps. Their fry-sides were scrumptiously caramelized, sizzling as they arrived. Adorable ugly babies! You dunked them in soy-chili-vinegar sauce. Chewy, crispy, juicy, porky, salty, spicy, sour, unctuous, fragrant, you were dumbstruck. For this dish alone, it’s well worth the trip in from the coast. But there’s more! 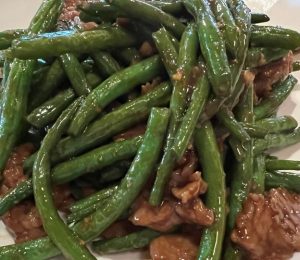 The string beans in their String Beans with Beef were cooked perfectly, bendy yet crisp, notably sweet.  Sliced flank steak (you think), tenderized (probably with baking soda), was fat-free and delicious. From the tingle on your lips, you wonder if the sauce (made from who knows what, oyster sauce, maybe), contained a drop of mustard oil, culinary napalm. 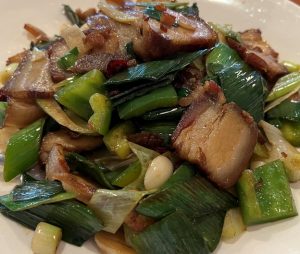 Some of the greatest Chinese dishes have innocuous names. Smoked Pork with Leeks doesn’t sound smashing but it was. It was pork belly, what bacon is made from, meaty and fatty and salty and smoky. There were sliced leek greens and roughly chopped whites. And celery, green pepper, a few fermented black beans. And truck loads of barely cooked garlic that radiated flavor and scent. The dish was shockingly delicious. A DEA agent would lock it down as a controlled substance. 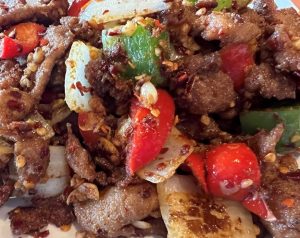 Cheng Du Barbecued Lamb gave no hint of having been barbecued. It lacked the char you anticipated that induced you to order it. The lamb was tender and gristle-free. In Chinese cuisine, meat is often tenderized with baking soda (which is then washed off). But this can wash out flavor and texture too. Though you’re confident this was lamb, you could identify no lamb flavor. It could just as easily have been Heffalump. It was stir-fried with onion and red and green pepper. It was pretty good but you felt over-spiced with capsaicin and cumin. 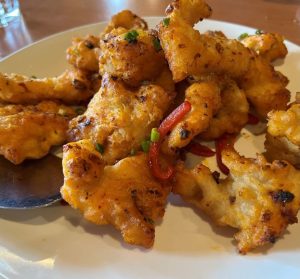 Their Soleful Delight (Tender Sole Fish Morsels w/Thinly Cut Bell Peppers and Scallions) was a massive portion of sole, crisply battered, augmented by red peppers, garlic, and fermented black beans which were like salty pops from a cap gun. You loved it. Your wife not. She felt a firmer fish, halibut perhaps, was called for. 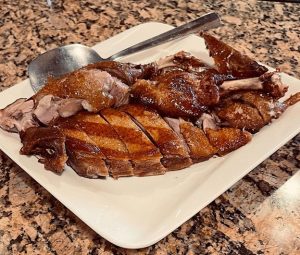 The Camphor and Wood Smoked Duck was fragrant with smoke, a lovely incense. The meat was tender and moist, hyper-ducky. Skin crisp. Though you’d surely order it again, you only wish it had been served, as you’ve come to like it in a number of restaurants in China, with a steamed bun or pancake into which you could tuck the meat.

Moo Shu Pork has countless variations but essentially is a mild mixture of shredded pork, mushroom (maybe), wood ear (a mushroomy fungus also called tree ear), and scrambled egg. Sometimes this or that is thrown in, scallions or sprouts for instance. There is no definitive version. You prefer yours with much more wood ear than they used. Also, typically it’s eaten within a flour wrapper. Fresh, toasty flour wrappers are ideal. You’re almost certain theirs were premade, more akin to flour tortillas. If they made these fresh, this dish would soar. 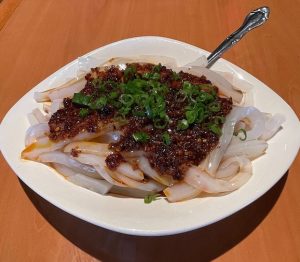 Sichuan Bean Noodles are semi-transparent, Rubenesque, made from mung bean flour. Theirs were soft yet chewy, like a cherub’s earlobe. The sauce was chili crisp. If you’ve been diagnosed with noodleosis (an affliction characterized by a fixation on all noodles at all times that can only be assuaged by eating all you can), nab them. These are hard to find even in China.

And if you suffer from noodleosis, then it is vital you order their Cheng Du Hand Shaven Noodles. Years back you took a high-speed train from Shanghai to Hangzhou (an immensely scenic area of tea plantations where couples flock to get married). The fellow who met you offered to take you to a newly opened Dairy Queen (good Lord!) but reading your horrified expression and thinking quick, he immediately added that this was unless you preferred a Muslim restaurant that specialized in hand shaven noodles. The chefs there hefted massive hunks of dough and with an implement like a trowel shaved chubby, irregular ribbons of it straight into a cauldron of boiling lamb broth. It was so thrilling with a Tsingtao that you ordered a second bowl (and a second Tsingtao). 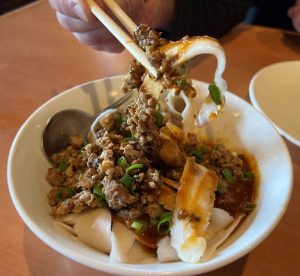 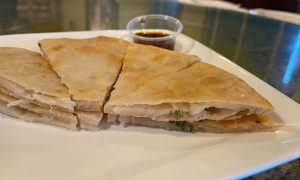 Their scallion pancake was technically perfect, just like the teacher does it in chef school. It was crisp and pliable at the same time, imbued with the wonderful flavor (and scent) of scallion (a vegetable far too easily taken for granted), and flaky like a French pastry. The sauce that came with it was soy, Sriracha, vinegar. If you had your way, instead of Siracha (which is Vietnamese) they’d have chili oil, preferably based on sesame oil. 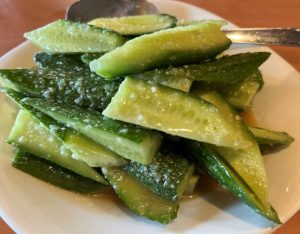 Cucumber Cubes in Garlic Sesame sauce equaled the best you’ve had in China. The cukes were super fresh, super crisp, cold, vinegary, salty, garlicy, a hint of sesame. A great foil to all the meaty dishes you’re guilty of ordering.

Before The Cheesecake Factory introduced Vietnamese Salad Rolls (cylinders of rice paper stuffed with rice noodles, vegs, a protein, fresh mint) in their restaurants, their test kitchen had tasting panels try various versions. They found that many tasters didn’t like the fresh mint, an intrinsic flavoring. So, they went ahead without it. This is like bringing spaghetti sauce to a menu without garlic. They designed their food not to offend the greatest number of less discerning eaters. P.F. Chang’s and Panda Express and every supermarket with deli-case Chinese does likewise. 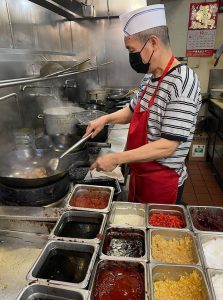 A Taste of Sichuan goes opposite. Anti-tasting panel, anti-bland, they aim their food to please a smaller number of more discerning eaters. This is the hallmark of a great restaurant. With a few exceptions, it serves just the sort of food you’d get in many Chinese restaurants in China, cooked with time-honored technique and high integrity.

Service was pleasant. The interior tired. But who cares.

Tellingly, on a Sunday early afternoon the large parking lot was completely full. There was a lobby wait to be seated (reservations are only available for groups of eight or more). And most of the customers were Chinese, many three-generation family groups.

If you seek the standards like chow mein, orange chicken, egg rolls, they’ve got it. Probably they’re excellent. However, the menu is extensive and explores the corners of Chinese cuisine. This is the place to take risks and try some things you haven’t had before. They don’t have croc or camel hump on the menu but surely you can special order them. Be certain to say you want the croc frisky, and declawed might be a good idea. Come with a large group if you can so you can order lots.

Best of all, unlike any Chinese restaurant you’ve eaten at in China, Taste of Sichuan has fortune cookies. You’re excited to learn that soon you’ll make a fortune in real-estate. 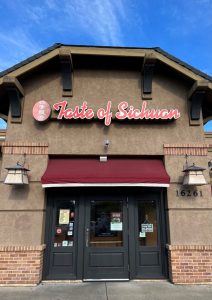