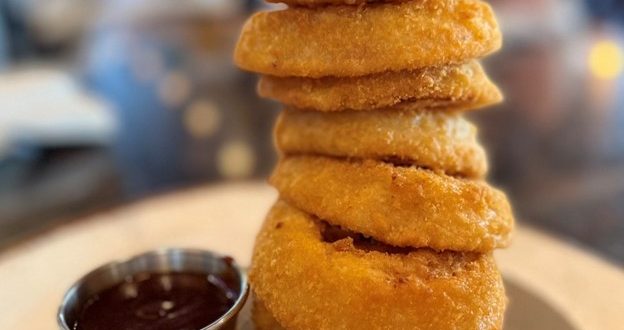 By the Ardent Gourmet

They came vertically stacked on a spindle much like a toddler’s stacking toy. But they were distinctly organic, glistening with oil, which was suggestive of life. You eyed them carefully and then, before they might react, snatched one and chomped. Crunchy, salty, oily, oniony, with zero finesse, The Pelican Brewery’s onion rings – of the panko school — were great. With their spicy aioli and BBQ sauces they were greater yet.

Their menu proudly proclaims that their French fries are battered. But this is nothing to be proud of. Battering is a felony, look it up. It makes as much sense as battering pasta. This is a restaurant not a State Fair where they batter Snickers bars. A restaurant should glorify the food it serves, not mummify it. Probably the hope was that the batter would help to make the fries crisper. But the hope was forlorn. The fries were as crisp as potato chips left out overnight. They barely sparked your munch reflex. 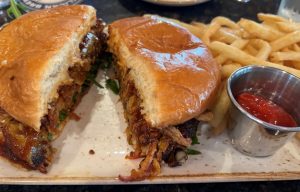 Your wife’s Backyard Barbecue Burger was based on an optional black-bean patty with a texture like a drained can of black beans lightly compressed. This is an odd offering given the superb plant-based burgers or other burger substitutes made from feisty combinations of grains and seeds available these days. Also, according to your server it wasn’t barbecued, so they shouldn’t suggest that it was. The beef patty on your Spicy Burger was tasty but would have been better done over charcoal. Both burgers needed a layer of crisp romaine lettuce, a thick slice of good (not industrial) tomato, and a slug of onion for sharp vegetal contrast. Instead, both had a little arugula – today’s chic green –which wilted, and a flavored mayonnaise (though you couldn’t identify its flavor) that glopped everything together. Both were strewn with pre-fried onions like the kind put on string bean casserole at Thanksgiving which was clever but forgettable, one of those hacky things you read about. It’s as though in trying to make their burgers nifty, they made them unremarkable. The housemade buns were notably good. 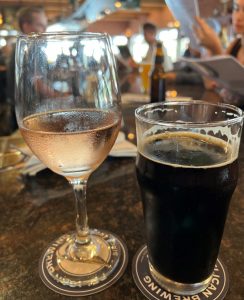 Your wife liked her rosé. You liked your house-brewed Tsunami Stout.

Prices for all things are out of control, but even so, their prices are high. Ten onion rings cost $17.49 (a weird price, no doubt suggested by some exotic restaurant pricing algorithm). As good as they were and even though they were smartly stacked, charging $1.75 per onion ring takes some cheek. And a tuft of arugula and a few Durkee onions don’t justify the cost of mediocre burgers served with sad fries at $20.99 each. Had they been superb, that would have been another matter. 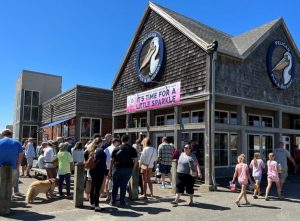 The Pelican was densely crowded on a Thursday early afternoon. You found space at the bar. Servers valiantly did their best but they clearly were understaffed to handle so many customers. The room felt clogged with people and noise. For that matter, the parking lot (which had its own parking monitor… like a lunchroom monitor) and the area surrounding the restaurant felt clogged with people and noise. It reminded you of New York, Coney Island, such were the crowds.
Before departing you tried to snag their WiFi but couldn’t find a password. You asked a waiter who told you that they didn’t give it out because when people went online they ignored one another. In other words, withholding the password was supposed to foster human interaction. This overlooks the fact that ignoring certain folks is the only way to stay sane. It also raised your hackles as enforced virtue always does. It felt like finger wagging.
There are times when all you want is food that’s salty, peppery, greasy, crunchy, meaty, cheesey, mayonnaisey, mustardy, ketchupy along with a Wet Wipe, all finer points irrelevant. This is what The Pelican Brewery churns out to countless approving fans, minus the Wet Wipe.
But, if some call you pompous about food (and for good reason), if you have opinions about sea salt, if your cookbooks are dog-eared, if you gaze at Ambrosia, voluptuous Greek goddess of Food, and think impure thoughts, than it could be that there are other restaurants to suit you better.

Everything else we had, meh.