The ground bucked, the trees swayed dangerously, The hand-hewn planks and logs holding the structures together began to pull apart. Walls collapsed, roofs fell, trapping those still inside. Those people still on their feet felt waves of acute nausea, as if they were at sea seasick in an awful storm. Many dropped to the ground.
After what seemed like forever, the horrible shaking finally stopped. The people began calling out to each other in the dark, searching for friends, family, and loved ones.

Up on the hillside well above the small community, a band of hunters watched from in the dark, horrified, as the few outside fired were scattered, fading sparks in the dark, only to be replaced as the buildings made of cedar began to catch fire, ignited by the warming fires inside. One of the many landslides the shaking triggered had erased their trail back to the community. Now there was no fast way down in the dark and they could only listen.
Out at sea and unseen in the dark, the ocean began to recede, only to rush ashore in a massive surge that washed away the small community of survivors. The surge roared inland, uprooting trees and washing over high ground, finally angrily battering against the flanks of the coastal mountains.
Again and again, the giant ocean surges pummeled the land. When the waves subsided the small band of hunters could see in the morning light that familiar beaches and inlets were gone, underwater. The land had dropped many feet, and in places what had once been forests was now awash in seawater.
These survivors, men, women, and older children, who were camped out in the process of butchering, smoking, and drying an elk, were lucky. They carried with them all they needed to survive. They had tools and could make more. The elk would provide needed food for many weeks. Each of them knew how to build a shelter, start a fire, find food, make tools, and survive in the wintertime coastal rain forest. There was game to hunt, and fish to eat. It would be hard without their loved ones, but they would survive and tell the story.

Would you?
The date is January 26th, 1700, at 9 PM, the location is one of many places on the Oregon Coast, and this is a fictional story, but one based on an actual event that happened. The question remains. Would you survive a massive rupture of the Cascadia Subduction zone just offshore?
Anyone who has lived on the coast for fifteen years or longer has experienced the other more frequent disasters we have experienced. Flooding, windstorms, week-long power outages, and being cut off from all points outside of the county due to highway blockages. These are familiar hazards of living here, and long time locals know how to prepare. Some people remember the April 4, 1991 slide on highway 6 that covered 600 feet of road and closed the road for months. In 2006 and 2007, massive storms knocked power out to virtually the entire county, with many people waiting well over a week for power to be restored. All the highways out were closed. Living on the coast means being prepared for a wide variety of emergencies in addition to earthquakes and tsunamis.

Emergency Preparedness in Bay City
Bay City is working on this very issue. The City reached out to citizens with a request for volunteers. A small town does not have the resources to do the necessary planning, and no town or city can store the necessary supplies to take care of its citizens for an extended period. Two emergency sheds have been constructed in town, up above the tsunami inundation zones, and blue lines are painted on the roads to indicate the likely elevation needed to be safe. Bay City residents received a newsletter informing them of how to prepare.
Many citizens responded and have become block captains. A block captain is a volunteer whose job is to help their neighbors look after one another in case of an emergency. Initially, they had worked on a program called Map Your Neighborhood, which meant either holding a neighborhood meeting or talking with neighbors to help them learn about one another, such as, is anyone medically trailed? Does someone work in construction? How about a ham radio operator? How about neighbors who may be elderly or medically vulnerable? Do you have a fire extinguisher in case a fire starts in a neighbors house? The idea is that in a major disaster, our neighbors are the first responders who take care of each other. Formal emergency services are likely to be fully committed to other, possibly more serious, situations. Especially in a major disaster where emergency services are overwhelmed and/or are trying to survive themselves.

Recently, the committee met with the Emergency Volunteer Corps of Nehalem Bay (EVCNB) to learn from their example. The volunteer corps is very well organized and is very prepared for emergencies. They were able to step in and help after the tornado hit Manzanita a few years ago, and volunteers are assisting Tillamook Adventist in the current pandemic surge.
The committee learned that it is critically important to raise community awareness and preparation for disasters. It is very difficult, if not impossible, for any municipality, particularly a small one, to store enough food and supplies for a major disaster that lasts for many weeks, especially one as extensive as a major earthquake and tsunami incident that would require many weeks and maybe longer without services or supplies. Each family and citizen will need to store their food, water, sanitation supplies, and other emergency supplies, enough to last. Those people living in a Tsunami zone will need to make arrangements in case they can not return to their residence. 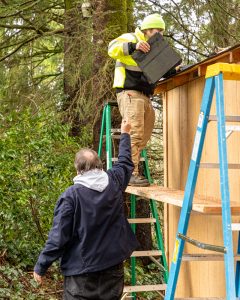 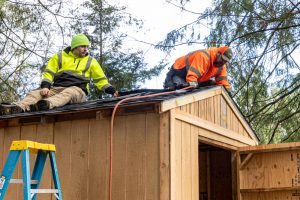 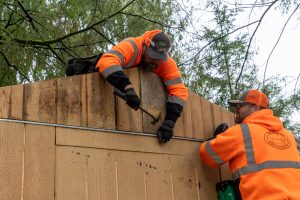 Currently, estimates are that we will need supplies for at least four weeks, but in the event of the worst-case scenario, a full rupture of the Cascadia Subduction Zone, the devastation will run from Northern California, all across Oregon, and into lower Canada. In this event, even metro areas like Portland and Seattle will have massive damage. Rescue efforts are likely to be delayed significantly.
Liane Welch, Bay City Manager, is a member of the committee. “As a resident,” she said, “it is important to me that we have some kind of plan for disasters whether it be a wildfire, which we saw on Pike Road, tsunami – and we had the distant tsunami just recently, an earthquake, and severe weather events. It is important to communicate with our neighbors and make sure they are OK.”

One recommendation was to take the next step beyond Map Your Neighborhood, to what is termed Plan Your Neighborhood, which expands the former to bring together larger areas. The committee is working on this and more information will be forthcoming.

The committee is also working on putting together emergency cans with a limited number of useful items and information on how to prepare for an emergency yourself. They recently met with a member of the EVCNB for discussion on a communications plan. As a result, the committee is purchasing four emergency radios.

Welch also pointed out that volunteers are always welcome. “The fire department is having an open house in early May. The emergency committee will be there to provide information and to sign up volunteers.” Those who are interested in volunteering could also come to the next scheduled meeting, which is February 22nd, in the Bay City Hall.

Tillamook County has a long history of neighbors helping neighbors. It is how we dealt with the 1996 flood which did so much damage and devastated dairy herds and dairy farms. In 2007, neighbors checked on neighbors, neighbors helped open roads blocked by blown-down trees. In 2020 and the Pike Road Fire, neighbors checked on neighbors. In the event of a future disaster, our neighbors will still be there. In the case of the Big One, our neighbors may be all we have for quite a while. If you live in or around Bay City, and want to help, contact Bay City Hall at 503-377-2288 or join them at the February 22nd meeting in the City hall at 5:30 PM.