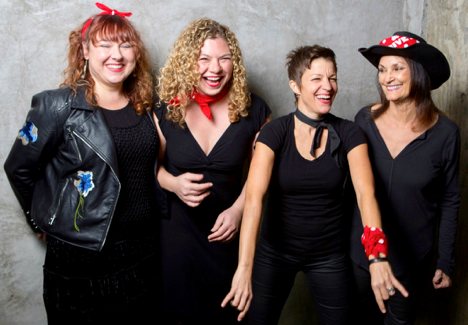 Ashleigh Flynn & the Riveters will be bringing their hard kicking country rock to the Hoffman Center stage on November 9 at 7 pm.
In both name and spirit, this all-female band is a nod to the “Rosie the Riveter” archetype and an homage to the millions of American women who entered this country’s male-dominated workforce during World War II.

With a fresh slate of songs in her arsenal, Flynn returned to the studio in 2017 to develop this bold new project: Ashleigh Flynn & the Riveters. The record’s 11 tracks feature Flynn’s compelling brand of storytelling and soulful vocals, amped-up and virtuously enveloped by the electrified Riveters. Inspired in large part by her new guitar player Nancy Luca’s style and skill, the album hearkens back to early Stones and ‘70s psychedelic country rock,
yet the result feels simultaneously new and necessary. Produced by Flynn’s longtime musical collaborator, Chris Funk of the Decemberists, this highly anticipated LP was recorded and mixed at Halfling Studios in Portland and supported by grants from the Oregon Arts Commission and the Regional Arts and Culture Council.
Like the Ohio to muddy Ol’ Miss, Ashleigh Flynn follows her troubadour heart. Flynn grew up in Kentucky and cut her teeth on local bluegrass music and Motown. A prolific songwriter and performer blessed with unbridled charisma, she has taken the stage at Bonnaroo and Bumbershoot, Delfest, High Sierra and Vancouver Folk Fest and toured with the likes of Todd Snider and the Wood Brothers.
Thanks to two critically acclaimed independently released studio albums and a live EP, Flynn is making a name for herself in Americana music. She arrived on the scene in 2008 with the release of American Dream, a poetic lament to the elusiveness of that national ethos. A Million Stars followed in 2013 – a rollicking journey celebrating the women pioneers of the American West. Her most recent EP, The Low Arc of the Sun, 2016, was recorded live on the winter solstice in Portland, Oregon as an offering to the coming of the light.
Ashleigh Flynn and the Riveters – Hoffman Center for the Arts, 594 Laneda Avenue, Manzanita
Saturday November 9 at 7:00 pm; $15 admission – Cash only please – All ages event 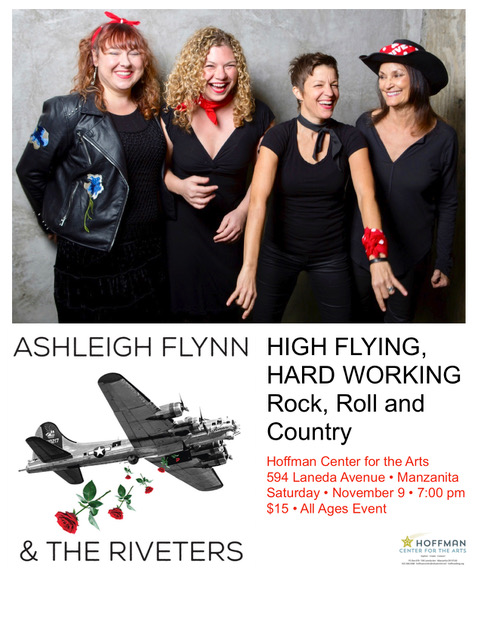