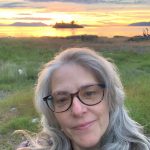 By Madame Dana Zia
On September 10th in the wee hours of the dewy morning at 3:00am, the Full Moon in Pisces floated into our dream time. This Full Moon coupled with the Virgo Sun (and many other aspects) activates within us the desire to set the space for our dreams to gestate.
This Full Moon is a gateway into the dream world with it loosely conjunct Neptune — the planet of imagination, dreams and spirituality. Neptune has a kinship with Pisces and loves being there as it is right now. It has been in Pisces since 2011 and will be until 2026 because it is a very slow moving planet, (it takes 165 years to orbit around the Sun) and spends 14 years or so in each sign. Consequently, since it moves so slow, the Moon, who moves fast (it takes her 2.5 days to move through a sign!) she meets up with Neptune every month. So that’s not a big deal, but when the Moon meets up with a slow moving planet (such as Neptune) for the Full Moon, it deeply flavors the Moon energy.

Neptune and the Moon enjoy each other’s company, you could say they are kindred souls. They both are dreamy, romantic, emotional and artistic. When they are having tea and artfully decorated cakes in the sky, it is easy to lose track of time and not get anything done on the “to-do” list. That’s ok. This Full Moon is one for dreaming, journaling, doing art, deep conversations or swimming in calm pools. It is not one to charge out and clean out the garage or the junk drawer. It is one to dream, float and imagine.
Mercury echoes this energy as he is stationing retrograde during this Full Moon. By the 11th, he will be in retrograde till Oct 2nd. Mercury goes (apparently) retrograde 3 times a year for 3 weeks. Mercury moves REALLY fast with his orbit around the Sun only being 88 days! WHOOSH! When he stations retrograde it is not a time to quake in your boots but to relax, literally. Mercury retrograde is about slowing down, breathing, sitting a spell or laying around watching the clouds pass.
When we try to keep going at the break neck speeds that Mercury (or our culture) normally embraces, is when we get into trouble with Mercury retrograde. Mercury has kindred energy with such things like technology, travel, communication, negotiations, contracts and shipping. Ya know, “go time” stuff. When Mercury is retrograde, he takes a rest. He joins all the other retrograde planets Jupiter, Saturn, Uranus, Neptune, and Pluto to hang out and talk story.
I’m sure you’re getting the theme of this Full Moon window/Mercury retrograde now. For a few days here, breathe, relax, do things that you’ve been desiring to do that are pleasing and gentle. Do art, swim in the last of the summer Sun rays, take a long walk somewhere you’ve always wanted to. Dream up joyful and gentle things to do and welcome this energy opposed to struggle against it.
For more from Madame Zia, including personalized readings, see www.starsbydana.com