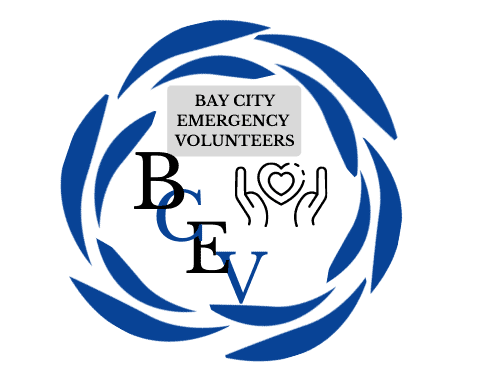 The BCEV is a group of volunteers interested in helping their community prepare for emergencies and disasters. The push for this comes from the constant threat of a major earthquake and resultant tsunamis from the Cascadia Fault just offshore. However, like the other groups, BCEV is also preparing for other emergencies and disasters that can impact Tillamook County. Residents are familiar with windstorms and flooding. In 2007, power was off for up to a week in portions of the county. Also, in the Labor Day east wind event in 2020, many people lost power for several days. The group hopes to help people be ready for such events. “We found out in 2020 with the Pike Road Fire that we needed to take wildfire more seriously,” BCEV president Don Backman commented. “And we only have to look at Manzanita to see that tornadoes are a possibility, too.”

The drive to establish the Bay City Emergency Volunteers came from City Councilor Helen Wright. “Helen got us though the pandemic as a group,” Backman said. “We had started up before then, but lost members during Covid when we couldn’t meet in person. Wright kept the group going and helped it restart once things opened back up.”

BCEV follows the reasoning that preparing for a major event such as the predicted Cascadia earthquake and tsunami’s helps the community prepare for any other events that happen, too. In that vein, BCEV has two sheds that they are gradually stocking with items such as plastic sheets and nails that people can use to patch holes in their roofs and create emergency shelter after the predicted quake. If a full scale event happens as predicted, the entire fault line along the Oregon Coast and Washington Coast will slip. This means the damage will be so extensive and over such a long area in Oregon and Washington that coastal residents will be on their own for quite some time. Weeks and months aren’t out of the discussion. It is impossible for small communities to stockpile enough supplies for an entire town. Residents are encouraged to create their own food and water supplies so they can last for weeks without electrical power or going to the grocery store.

BCEV adopted the neighborhood captain program currently being used in North County by the Emergency Volunteer Corp of Nehalem Bay (EVCNB). The storms of 2006 and 2007 and the recent windstorms have shown that neighbors helping neighbors is often the best way through disasters and emergencies. Emergency services can be overwhelmed dealing with too many demands. The group invites anyone interested to contact them or stop by at a meeting.

BCEV hopes to recruit more volunteers to help out. They are looking for a volunteer to fill the secretary position, and welcome volunteers at all levels of involvement. In addition, there is always a need for more neighborhood captains

The next meeting is tomorrow, Tuesday January 16, 2023.  BCEV holds monthly meetings on the third Monday of the month, starting at 5:30PM and running to 6:30PM, in the city hall. However, when Monday is a holiday, they meet on the following Tuesday. “We stick to that hour,” Backman said. “We respect that people work, have families, and don’t want to sit through endless meetings that drag on.” Interested individuals are invited to drop by the groups’ next meeting and check it out, or use the link on the website.

As a final note, Backman would like to meet with the similar groups in Garibaldi and Rockaway Beach. “We share a lot of the same issues,” Backman explained. “We don’t all have to reinvent the wheel. We can share ideas.”

The Bay City Emergency Volunteers hope people bookmark BCEVOR.ORG and follow the Facebook Page. “There is a lot of good information on there,” Backman said.