Since yesterday, Sunday August 21st, Seaside Fire & Rescue Beach Lifeguards and Water Rescue Team have pulled 16 distressed swimmers out of the ocean; and there was the drowning tragedy on Saturday August 20th. The water temperature is unusually warm for this time of year so people are venturing farther out and ultimately getting into trouble. There are lots of rip currents and drop-offs everywhere. PLEASE stay shallow and check in with a lifeguard to find out where the safer areas are to play in the water. Reminder lifeguards are only on SEASIDE beach from 11am-7pm daily. And most other Oregon beaches do not have lifeguards. One of best ways to stay safe is to wear a lifejacket, wetsuite and/or have a flotation device. The power of the ocean often overpowers even the best swimmers. Stay safe out there! We asked retired Emergency Manager Gordon McCraw about some of the beach hazards you need to always be aware of.

So, you have likely heard about the 50-year-old man that recently drowned in Seaside. What you may not know is lifeguards were already in the water in that area helping two other individuals caught in the Rip Current. As it turns out, about 80% of all beach rescues done by lifeguards are a result of Rip Currents and the U.S. Lifesaving Association says there are about 100 deaths a year attributed to rip currents. So far in 2022 there have been 39 deaths attributed to rip currents. It seems the Oregon Coast sees at least on death every year due to one beach hazard or another.

So, let’s review some of those hazards.
This time of year, with the hot weather and the large number of people enjoying the cooler coastal weather, and the ocean, Rip Currents are the greatest hazard. Last year the National Weather Service, who tracks the drownings nationwide, said at least 98 people died from Rip Currents, that is 24 more than in 2020. There have been 35 rip current deaths this year. So, what exactly is this current that can actually wash your feet out from under you in the surf zone? Well, Rip Currents are strong, narrow, seaward flows of water that form where waves break near the shore, then the water rushes back to sea. They can be caused by the strong onshore winds, or large swells from strong low pressure areas in the Pacific that push the high swells toward our coast. It is easiest to spot Rip Currents from an elevated position like a parking lot, beach access, sand dune or headland. Before you go

swim, watch the water for several minutes and know that even then, these currents can change. Look for narrow regions of choppy, rippled water headed offshore. Waves moving towards the shore may steepen as a result of the rip current flow, leading to a different water texture. Polarized sunglasses can help you spot a rip current by allowing you to see contrasting colors in the water. Rip current stand out as darker water. It is also best to leave one person on the beach to monitor for hazards, and swim where there is a lifeguard when possible. 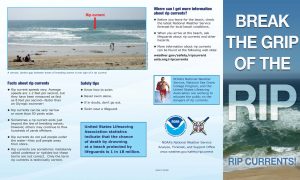 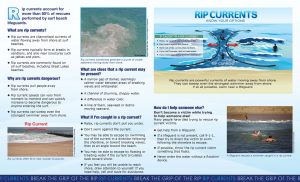 Our most common winter hazards, besides Rip Currents, are high surf or Sneaker Waves. A Sneaker Wave is a larger than average wave that can suddenly, and without warning, rush much higher on the beach than expected. These waves can break over the rocks, jetties, and lift logs with deadly force, sometimes throwing the log on top of the unfortunate unsuspecting individual. Since 1990, all major sneaker wave incidents have occurred between October and April though there is no “official” sneaker wave season. The safest thing to do, always, is never turn your back on the ocean. Avoid sitting or standing on or near large logs down near the surf zone. Know that the logs on the beach were actually thrown up there during one of our many winter storms. If you should get swept out to sea, don’t fight the current, instead conserve energy by floating and keeping your head above the water, and yell for help. If you are a bystander, you should never enter the water to make a rescue, instead, call 911 and keep a visual on the person.

These are a couple of the most common and most dangerous beach hazards that can turn a fun day at the beach, into a nightmare tragedy!