By Dan Haag
The slate of events offered by Friends of Cape Falcon Marine Reserve during the summer 2019 season spanned a wide variety of subjects and interests. From May through August there was a full schedule of free educational programs.
Each event strengthens the bond between community and environment by encouraging participants to look at their natural surroundings in a different way: by becoming citizen scientists. Seabird monitoring, for example, provides valuable data on how seabird populations are faring within and outside of the marine reserve. The BioBlitz and the two hikes each highlighted a different aspect of marine life on the north coast: intertidal life, whales, and seabirds. As such, these events enabled participants to learn about the ocean ecosystem from multiple angles.

The variety of events also allowed staff to connect with community members.
“This summer’s activities enabled me to learn more about Cape Falcon Marine Reserve, work with our partner organizations, and get to know the people in the communities on the north coast and beyond who are interested in ocean science and conservation,” said Margaret Minnick, the new coordinator for Friends of Cape Falcon Marine Reserve.

The busy schedule was highlighted by the following:

May 18th – Volunteers joined Friends of Cape Falcon Marine Reserve in counting pelicans at the local rocky island pelican roosting sites in the reserve, just off the community of Falcon Cove between Manzanita and Cannon Beach 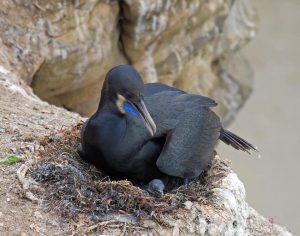 June 8th – Volunteer citizen scientists gathered for training to learn more about our three cormorant species that nest on the north coast and to join efforts to study them. Afterward, volunteers met up weekly throughout the summer to count nests, eggs and babies on cliffs and rocks in the Cape Falcon Marine Reserve. Bird monitoring events such as this provide invaluable data.
“This information will be helpful as we head into the Legislature’s evaluation of the marine reserves program in 2023, when they’ll be looking at all aspects of the program and considering if and how marine reserves will continue to be used as a management tool moving into the future,” Minnick said.
This effort was a partnership between Friends of Cape Falcon Marine Reserve, Portland Audubon, US Fish & Wildlife Service, and Haystack Rock Awareness Program.

June 8th – In honor of World Oceans Day, Friends of Cape Falcon Marine Reserve and Lower Nehalem Watershed Council hosted a screening of the award-winning film “Albatross” at North County Recreation District in Nehalem to a full house.
The film by artist Chris Jordan is a powerfully moving story about birds on Midway Island in the Pacific Ocean whose bodies are filled with ocean plastic.
“The screening of the powerful movie “Albatross” helped to connect with interested folks in a new way,” Minnick said. “Films like this are a great way to learn more and come together in a venue that is accessible to everyone.
After the film, a panel discussion on ocean plastic pollution included panelists David McCall, Solid Waste Program Manager at Tillamook County and Nadia Gardner, Volunteer Chair of Friends of Cape Falcon Marine Reserve.


July 6th – Tremendously low tides were the perfect setting for the Beach Walk & BioBlitz. Just north of Manzanita, the event was an opportunity to catalog the life of the Cape Falcon Marine Reserve tidepools and learn about the value of interconnected conservation corridors spanning mountain peaks to coastal waters. Participants in the BioBlitz and seabird monitoring projects were able to try their hand at species identification and collecting data for analysis by scientists and resource managers. They were also able to work directly with wildlife biologists while collecting data, and visited some of the less well known areas of the north coast.
This Explore Nature Tillamook Coast event was co-hosted by the Friends of Cape Falcon Marine Reserve, Lower Nehalem Community Trust, Lower Nehalem Watershed Council, Oregon Coast Aquarium and Haystack Rock Awareness Program and was attended by over 20 people.

July 23rd – Friends of Cape Falcon Marine Reserve, Oregon Coast Visitors Association, and Oregon State Parks partnered under the North Coast Tourism Management Network to recruit and train Trailhead and Beach Ambassadors.
The goal of the Trailhead and Beach Ambassador program is to promote responsible and safe recreation along the Oregon Coast to locals and visitors. The program leaders are looking for locals who would like to spend a couple hours on the weekend to support State Park Beach Rangers. Locations for the summer are Oswald West State Park, Cape Kiwanda, and Rockaway Beach. 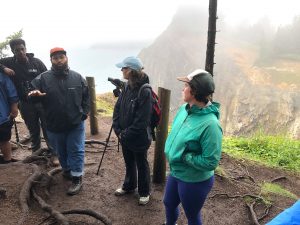 August 2nd – The Seabird Science Hike, co-hosted by Friends of Cape Falcon Marine Reserve and Portland Audubon, offered an easy one mile hike down to Devil’s Cauldron, Portland Audubon’s seabird monitoring site, to view nesting cormorants on the cliffs overlooking Cape Falcon Marine Reserve. Despite rainy weather, the group was able to view the birds through spotting scopes provided by Portland Audubon while Amelia O’Connor of Portland Audubon and Margaret Minnick of Friends of Cape Falcon explained the seabird monitoring project, which is tracking seabird nesting success rates within marine reserves and comparison areas. This stretch of coastline brims with energy and life. Nesting seabirds, wind swept landscapes, migrating whales, gliding pelicans, and ancient forests are all part of the story of this magical place. The hike continued through a coastal meadow and various forest environments before heading back.