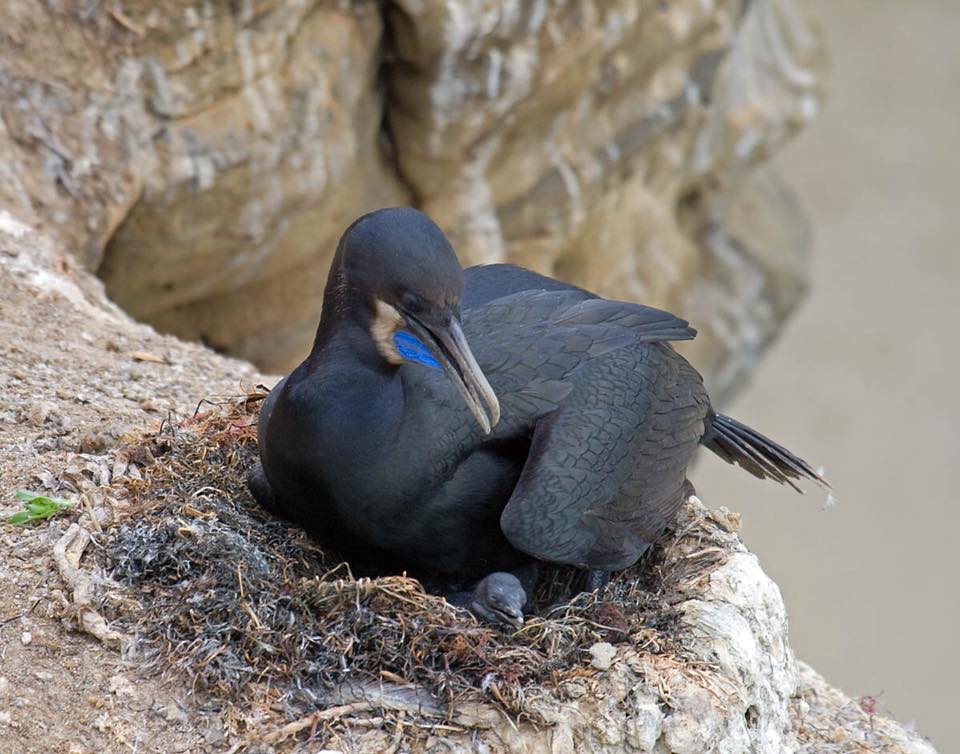 Every summer, volunteers with Friends of Cape Falcon Marine Reserve (CFMR) conduct regular monitoring around the reserve. Part of a working relationship with Audubon Society of Portland, the surveys support the shoreline bird observation program.
CFMR volunteers set up their observation sites at Devil’s Cauldron at Oswald West State Park, just north of Manzanita. There, they collect data on nesting cormorants.

Running about 8-10 weeks during the summer, data is noted on how many nests are established, how many eggs are on site, how many eggs hatch, how many fledgling cormorants leave the nest, and so on.
CFMR volunteers are often aided by Portland Audubon Society staff and interns, who make the official recording of the numbers.
CFMR volunteer and Manzanita resident Jeremy Sappington, an avid bird enthusiast, has been involved in the cormorant observation for the last three summers. He’s noticed a gradual dip in overall numbers each summer.
“It really wasn’t a very good summer,” he says. “Three years isn’t a long time, but during my time involved, the number of fledglings has gone down.”
There was a second cormorant site, located on the south site down by the cliffs. Sappington notes that site saw more nesting this past summer than the other site. Why is anyone’s guess.
“Who knows why birds go where they go?” he says.
Thankfully, more out-of-town visitors are taking interest in the observation effort, making it a vital educational outreach opportunity.
Because its an easy hike with a convenient pull-out, the observation site attracts a lot of foot traffic.
Sappington and other volunteers typically set up shop in the morning, around 11 am, and run to noon or one. He notes that hikers who traverse the trail have taken an interest in the project, typically between 15 to 20 a day.
“I’d say those who show the most interest are those who live somewhere other than the coast,” Sappington says. “Folks from the Midwest seem to have the most questions and are the most curious.”
Despite the amount of interest, Sappington notes that not many of the passersby are avid birders. Most just want to know a little about local ecosystems.


Sappington also enjoyed aiding in the observation of another familiar coastal bird, black oystercatchers.
“The process is more interesting because you have to find out where they’re nesting and they can be unpredictable,” he says.
Black osytercatchers do tend to return to the same nesting site year after year, but there are so few on here that they can be hard to spot. Though they are plentiful in Alaska and Canada, there are only about 800 along the entire Oregon Coast.
Sappington was able to locate a nesting pair near Hug Point. Another pair was spotted at Haystack Rock.
“They’re just such fascinating birds,” he says. “They mate for life. They have a lot of personality, great faces and eyes.”
Sappington watched that pair for 10 weeks and he observed one bird always by what he thought was the nesting site. Their behavior signaled the possible presence of eggs, though Sappington couldn’t get a closer look.
“One will forage while one guards the nest and they will switch,” he says, noting that he saw them switch positions three times through his scope.
Sappington says the birds seemed so unaffected by people, noting that the birds would allow people to within 10 to 12 feet while they were near the surf.
“Their nest was so close to constant heavy foot traffic that they became used to people,” he says.
Due to the duration of their stay in one spot, Sappington guesses that they had eggs at one time, though he doubts if they hatched.
Likewise, the pair at Haystack Rock did not hatch eggs either, something that concerns Sappington.
Again, folks noticed Sappington with his scope, allowing him to show off the bird, something he enjoyed doing for coastal newcomers.
“Once they saw that great face and those great eyes, they were captivated,” he says.
For info on volunteering for bird monitoring projects with Cape Falcon Marine Reserve in 2019, email capefalconmr@gmail.com.