By Dan Haag
It’s just around the corner, the infamous Oregon Coast rain and wind. When it hits, it’s time to take stock of what winter represents: perhaps a needed vacation, or settling down with a stack of books.
But don’t let wet weather dampen your sense of adventure, because the beauty surrounding Cape Falcon Marine Reserve is not limited by season.
Unlike our East Coast friends, we don’t need a snow blower to venture outdoors. Hiking in the winter rewards you with empty trails and a serenity you won’t find in July or August.

Two hikes near the marine reserve are particularly inviting.
Perched between Manzanita and Cannon Beach, Oswald West State Park is boundlessly beautiful: winding trails, lush undergrowth, regal trees, and vistas of sea and sand. Stretching along four miles of coastline between Arch Cape and Neah-Kah-Nie Mountain, this 2,500-acre preserve is a place of quiet contemplation and regenerative power.
Plentiful trails offer green rain cover and a cool embrace. One spirals up Neah-Kah-Nie Mountain for magnificent views of winter storms building over the Pacific.


Another stretches between Cape Falcon and Arch Cape. The 2-mile Cape Falcon Trail begins at the northwest parking lot along U.S. Highway 101. The most accessible trail, it winds through old growth. On a clear winter day at Cape Falcon, you can see north to Tillamook Head and south to Cape Lookout.
Another trail in the park, starting from a south parking lot, leads you to Short Sand Beach; a spur trail also connect the Cape Falcon Trial to the beach. Here lies the park’s essence; trees straight out of Tolkein, pounding waves and supplies for driftwood fort-building. A popular cove with surfers, several are always bobbing in the waves.
A popular park in the summer – 1.2 million visitors annually – Oswald West quiets considerably in the fall and winter, anticipating thundering surf and lashing wind. The hissing rain on the emerald canopy adds a tranquility found only outdoors in a coastal winter. 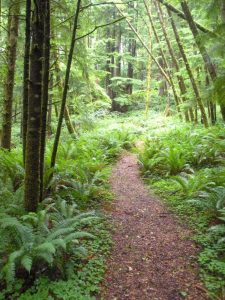 A few miles north of Oswald West lies Ecola Creek Forest Reserve, which encompasses the north and west forks of Ecola Creek. Tucked away from Cannon Beach to the east of U.S. Highway 101, the reserve is as quiet as the surface of the moon in the winter months. The splatter of rain drops on ferns and gravel crunching beneath your boots may be the only sounds you hear.
Hikers start at the end of Elk Creek Road and pass beneath towering red cedars. A gate bars motorized vehicles and a small information kiosk shows the way.
The road rises and falls through Sitka spruce, clear cuts now overtaken by alders, spruce and hemlock, and the constant burble of Ecola Creek’s west fork.
You’ll come to a road rising to the right. Head uphill to another information kiosk above a city water treatment facility. Turn right down the slope, cross a short bridge, and head deeper into a lush forest of spruce and cedar rising from a carpet of brilliant green ferns.
The trees offer ample cover from all but the heaviest rainfall, though the trail is often muddy and alive with skittering newts.
Eventually, you’ll come to a chip trail with a marker pointing up through the forest. At the top lies an old logging road, which loops back toward the power lines.
If you’re still feeling adventurous, head down under power lines and for the West Fork.
Though relatively easy to ford across in the summer, increased winter rains make it risky, more so with the creek’s slick, muddy banks. Spare your boots and save the crossing for a hot summer day — it’s time to head back, dry off, and get into that stack of books.
Whatever trail you wander this winter, go prepared. Some trail heads charge a small day use fee, and hikes are well worth the price of admission.
Keep an eye on weather conditions before you set out. A sturdy rain jacket is a must, as are well-worn, water-repellant boots.
Do your dogs a favor and bring them along: they get cabin fever, too. Remember, leashes are required at both Oswald West State Park and the Ecola Creek Forest Reserve. And bring along a few doggie bags to pack out your dogs’ waste.
Add a few basics such as water, light snacks, a flashlight and a cell phone. Most importantly, let someone know your route and destination, as cell reception can be spotty in the forest.
Don’t let the winter rain put a halt to trailblazing. Heed the words of Ralph Waldo Emerson, and hike enough to ensure “the strength of the shoe leather has passed into the fiber of your body.”