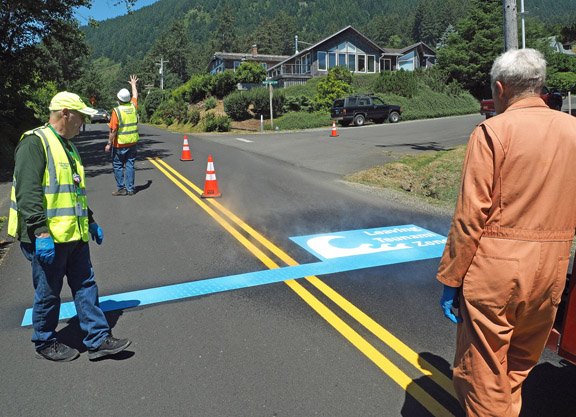 By David Dillon, Public Information Officer, Emergency Volunteer Corps of Nehalem Bay
Blue “Leaving Tsunami Zone” signs, installed on the pavement at nine locations in Bayside Gardens and Neahkahnie in north Tillamook County in late July, are the first step in a long-range effort to help residents and visitors understand how far they would need to go uphill to escape a major tsunami.

Sealed and torched down by a Tillamook County Public Works employee, with the assistance of five local Community Emergency Response Team (CERT) volunteers on July 26, the vinyl signs mark highest line of inundation to be expected following the dreaded “Big One” earthquake and subsequent tsunami. Oregon’s Department of Geology and Mineral Industries (DOGAMI) calculated the elevations for the worst-case scenario of a 9.0 or so earthquake.
In Bayside Gardens, lines were put down at Bayside Gardens Road just south of the fire station, on Seamont Way at The Promenade, and on Neptune Way at Neptune Court. The Neahkahnie lines were installed across Beulah Reed Road at Kahnie Trail Loop, on Treasure Rocks Road at Pirates Way, on Neahkahnie Road at 3rd Street, on Hillcrest Road at 2nd Street, and on Nehalem Road at Olive Way.
More blue lines will be installed around Manzanita, Nehalem, and Wheeler, when approval, planning and scheduling can be accomplished. Further enhancements to the effort will include additional glow-in-the dark pavement markings pointing the way to high ground, plus tsunami directional and “You Are Here” signs. 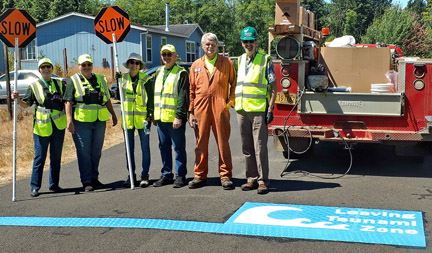 Mike Wynands, from the Tillamook County Public Works Department, led the first installation work. Lloyd Baird, Jo Cooper, Mary Dunn, Stewart Martin, and Paula Peek, all members of the Emergency Volunteer Corps of Nehalem Bay, assisted him.
The Oregon Office of Emergency Management is coordinating the Tsunami Blue Line project with DOGAMI, and is using funds from the National Tsunami Hazard Mitigation program to purchase materials for local communities. The project, one of the first of its kind in the U.S., was inspired by a program developed in New Zealand, a country which has experienced several large earthquakes and tsunamis.
The EVCNB Task Force on Tsunami Signage and Wayfinding, aka the “Wayfinding Team,” was formed in 2016 to study and make recommendations to the three cities and Tillamook Public Works for the Nehalem Bay area. Their study looked at the risks from landslides, tree and power line falls, and the best routes to quickly get to high ground. Implementation of the remaining wayfinding effort has now been transferred to the three cities, which will phase in the installation.