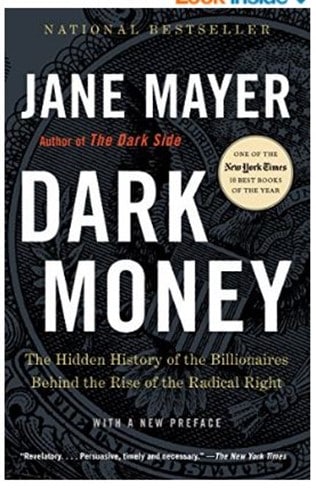 By Jim Heffernan
I found this is a very important and fascinating book. It’s eight years old, but I think its insights are still very valid and accurate.
This is Jane Mayer’s fourth book. She is primarily a journalist. Her writing is spritely and her insights are profound. She has been a staff writer for the New Yorker for nearly three decades.
Her book is divided into three parts; Part One – Weaponizing Philantropy: The War of Ideas, 1970-2008; Part Two – Secret Sponsors: Covert Operations, 2009-2010; and Part Three – Privatizing Politics; Total Control 2011-1014.
She starts out the book by profiling the Kochs. This was very eye-opening for me. I did not know that Fred Koch, senior, built his early fortune by supplying oil refineries to Joseph Stalin and Adolph Hitler.

In addition to the Kochs, she also profiles; Richard Mellon Scaife, an heir to the Mellon banking and Gulf Oil fortunes; Harry and Lynde Bradley, Midwesterners enriched by defense contracts; John M. Olin, a chemical and munitions company titan; the Coors brewing family of Colorado; and the DeVos family of Michigan, founders of the Amway marketing empire.
They all were a little different, but they all shared vast inherited wealth and a deep-seated hatred of taxes. The government that grew out of the Roosevelt and Eisenhower years was their enemy.
They all used the Lewis Powell memo “Attack on American Free Enterprise System”* as a general blueprint for their course of action. Lewis Powell wrote the memo for the Education Committee of the U.S. Chamber of Commerce in 1971.
Lewis Powell was a prominent lawyer who made lots of money by defending tobacco use in court. He insisted tobacco use was actually beneficial to health. In 1973, Richard Nixon appointed him to the Supreme Court.
Powell’s memo totals some 71 pages. It alternates between stoking fear and advocating ways to use money to influence government, education, and the news media.
The Koch brothers and their cronies contributed billions to politicians, PACs (Political Action Committees), think tanks, and universities. They described their actions as “establishing beachheads”.
Part Two describes their involvement in organizations such as the “Citizens for a Sound Economy”, the “Tea Party”, “Americans For Prosperity”. They also established academic groups like the “Federalist Society”, the “Cato Institute” and the “Mercatus Center”. All these entities presented a front of being “grass roots” organizations, but they were well fertilized with right wing money.
Part Three details their election experiences. Despite being able to inject massive amount of money into the political arena, they were not always successful in achieving their goals. They never managed to defeat Obama, but they did manage to gain influence in mid-western and southern states. Their efforts continue.
In the 2020 election, local candidates, now State Senator and State Representative respectively, Suzanne Weber received $14,500 from Koch Industries and Cyrus Javadi received $8,000 from Koch Industries.

445 pages, published January 19, 2016. Available at Cloud and Leaf Bookstore, Manzanita and at Tillamook Public Library. Also Powell’s, Amazon, and Barnes and Noble. (later editions have a preface written after the 2016 election. If you have an earlier edition, you can find the new preface by using the “look inside” feature of Amazon’s kindle listing.)

As always, I welcome discussion at codger817@gmail.com

*The full text of Powell memo can be found at the following website. https://scholarlycommons.law.wlu.edu/powellmemo/1/