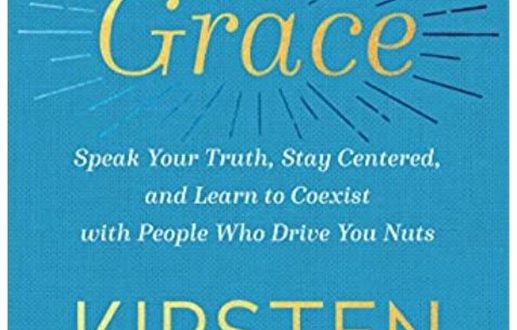 By Jim Heffernan
“Braver Angels” (a national organization that promotes civil communication between people of differing viewpoints) recommended this book. I am very glad they did, I enjoyed it very much.
This isn’t a book about somebody named Grace, it’s mostly about the nebulous and ethereal quality called grace. If you had a Catholic education, you might still remember the catechism definition of grace, “grace is the free and undeserved help that God gives us to respond to his call to become children of God, adoptive sons, partakers of the divine nature and of eternal life”. I don’t really know if there’s a God that dispenses grace, but I do believe grace exists.

I believe grace is the something like a social “lubricant” that encourages us to exhibit all the traits commonly called “virtues”. Grace enables us to have humility and empathy. Grace is the underpinning of kindness, charity and love.
Our habits and viewpoints largely determine whether we operate with a surplus or deficit of grace.
At present, our country seems to have a significant deficit of grace and I believe the lack of grace is what leads to our disharmony. Saving our country will require that we each find ways of “saving grace” in our lives and in our hearts.
The author, Kirsten Powers, wrote the book as a response to the mental trauma she experienced in what she calls “the fight club arena of American politics and media”. She spent time with Fox News as a “liberal” counterpoint before moving on the CNN.
Like many of us, she found herself demonizing and dehumanizing the people she disagreed with. For a time, she found herself marinating in the judgment, rage, hatred, frustration and resentment she felt toward them. It affected her mental and physical health. She knew she had to do something and she went through a series of steps that amplified her supply of grace and she thus saved herself with grace.
Her first targets were binary thinking and the biases that that sort of thinking produces. We have a natural tendency to see things as black and white, good and bad. Truthfully, it’s usually not that simple.
A verse from Bob Dylan’s song, “My Back Pages” resonates in my memory, “Good and bad, I defined these terms quite clear, no doubt somehow. But I was so much older then, I’m younger than that now.”
One of the examples she gives in her book is the close friendship that existed be Supreme Court Justices Anton Scalia and Ruth Bader Ginsburg. While they only agreed with one another on 7% of their 5-4 cases, they regularly dined and vacationed together with their families. Scalia once said about Ruth, “What’s not to like? Except her views on the law.”
She further advises us to see the “other” as human, to set boundaries that keep ourselves safe from becoming too involved in the argument, to exercise humility and realize we might not always be right, and to learn how to say no to the fight impulse.
I feel like reading this book just after reading “I Never Thought of It That Way:……..” by Monica Guzman was like receiving a vaccine and a booster against the deadly discord that afflicts us today.
Grace may be the perfect solution for what drives us apart.