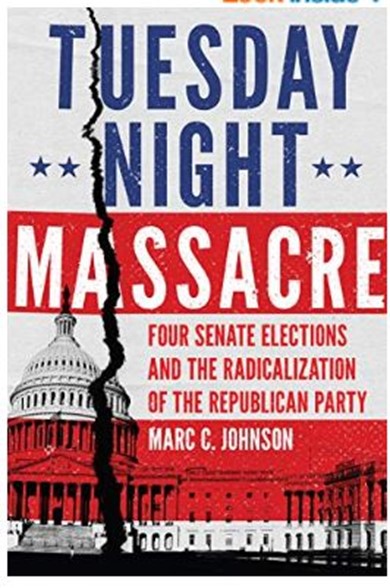 By Jim Heffernan
I can’t shake the sensation that our political system and me were hit by a truck sometime in the distant past.
As I brush myself off and look down that road, way into the past, I am mystified. I am hoping someone else saw what happened and at least managed to get a license plate number.
It turns out someone did, it’s a “vanity plate” and it says “NCPAC”.
Local author, Marc C. Johnson, has written an excellent book that explains a lot about that truck and the damage it did. I’ve done a lot of reading since the 2020 election and I think this book explains our path to today as well as any.

The Tuesday night in question is November 4, 1980. It was the night of the landslide win by President Reagan that also swept 12 incumbent Democrat senators out of office. It was an event that changed the Senate and the nation. History affirms that it was not a change for the better.
The NCPAC vanity plate stood for National Conservative Political Action Committee which was founded in 1975 by Richard Viguerie, Jesse Helms, Charles Black, Roger Stone, and John T. “Terry” Dolan. Karl Rove and Roger Ailes were not actually with NCPAC, but were allies that emerged to haunt us for years afterward.
Richard Viquerie began his career with the campaign of Barry Goldwater and more or less founded the political direct mail industry, an industry that has grown exponentially (along with his wealth) ever since and has expanded into the internet.
Jesse Helms who was a freshman Senator from North Carolina and a die-hard segregationist. This excerpt from one of his books (When Free Men Shall Stand) sums up his attitude, “such utopian slogans as Peace with Honor, Minimum Wage, Racial Equality, Women’s Liberation, National Health Insurance, Civil Liberty are ploys by which to divide humanity” .
Terry Dolan, Charles Black, and Roger Stone were in their twenties and were veterans of the Nixon campaigns and leadership positions in the College Republicans. Terry Dolan died at age 36 of AIDS, but Charles Black and Roger Stone persist to this day as high-powered lobbyists for the right.
In 1980, they drove their truck through a loop hole in campaign finance laws that limited the amount that could be contributed for a candidates election but did not limit what a PAC or independent entity could spend in campaigns against a candidate.
Broadly speaking, their target was the U.S. Senate. In particular they targeted, Sen. Frank Church of Idaho, Sen. George McGovern of South Dakota, Sen. Birch Bayh of Indiana, and Sen. Tom Culver of Iowa. They saved a few barbs for Jimmy Carter also.
A chapter is devoted to each of the Senators and how the campaign unfolds. It’s a similar gambit in each state.
The direct mail appeals start in the summer. They are designed to generate fear and contributions. In the author’s words, they were “… less about a theory of government than a sharp-elbowed playbook designed to demonize opponents and win elections.” Popular subjects in 1980 were the crippling of America’s military might with the SALT II disarmament treaty and a giving the Panama Canal to the communists by the treaties that transferred ownership and control of the canal to Panama. History has exposed these threats as severely overblown.
What’s so very striking to me is how these were four senators who were intellectually gifted and did masterful work for the nation and were brought down by lies and innuendo.
We can see the results of this pivotal moment of history in the chaos and disarray of our present day Senate. 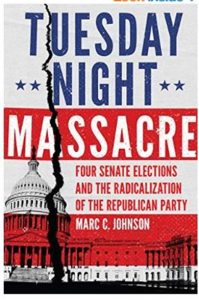