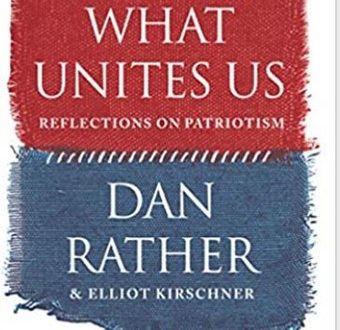 By Jim Heffernan
I found this book of essays very enjoyable. There are 16 essays, each extolling a particular aspect of a broad topic and each aspect seems to be somehow diminished in our present political climate.
For those of you who don’t remember Dan Rather, he was a very prominent television newscaster who spent six decades at the highest level of television news. His co-writer, Elliot Kirschner, was Rather’s program producer for 20+ years.
The essays are grouped in five broad topics; Freedom (essays on “The Vote”, “Dissent” and “The Press”, Community (essays on “Inclusion”, “Empathy”, and “Immigration”, Exploration (essays on “Science”, “Books”, and “The Arts”, Responsibility (essays on “The Environment”, “Public Education”, and “Service”), and Character (essays on “Audacity”, “Steady”, and “Courage”.) He ends the book with a bonus essay on citizenship.
Their writing is characterized by a broad historical viewpoint stretching from Rather’s childhood in 1930’s rural Texas until the present day. I was very impressed by how they were able to make their points without resorting to personal attacks. 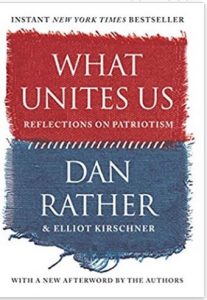 Here are some excepts that particularly stuck me:
Page 2: “I worry about how important norms of American life are being shattered, along with a unity of purpose. I see the chasms of entrenched partisanship, growing inequality on income and opportunity, and the lingering injustices around race, gender, and sexual orientation. I think of my children and my grandchildren. how will they and their generations answer the call?”
” The true foundations for those buildings are not brick and stone, but our Constitution, our rule of law, our traditions, our work ethic, our empathy, our pragmatism, and our basic decency.”

Page 10: “Today we are a divided country. Too many decent and law-abiding men and especially women are being told that this nation in not for them, that their values make us weaker, that their voice is better left unspoken. We see elected officials pounding their chests, saying their vision of America represents the only real patriotism. To them I say that patriotism is not a cudgel. It is not an arms race. It also means confronting honestly what is wrong or sinful with our nation and government. I see my love of country imbued with a responsibility to bear witness to its faults.”

Page 42: “The role of dissent is to force all of us to question our dogmas and biases. It is to stretch the spectrum of discourse.”

Page 283: “My deepest concern is that we lose a sense of common national community, that we retrench into like-minded enclaves where we only look out for ourselves and the people like us. The values I have sought to explore in this book are the ones that can and should transcend these divisions. But we have seen that they cannot be taken for granted, that they need the energy of heroic citizenship.”