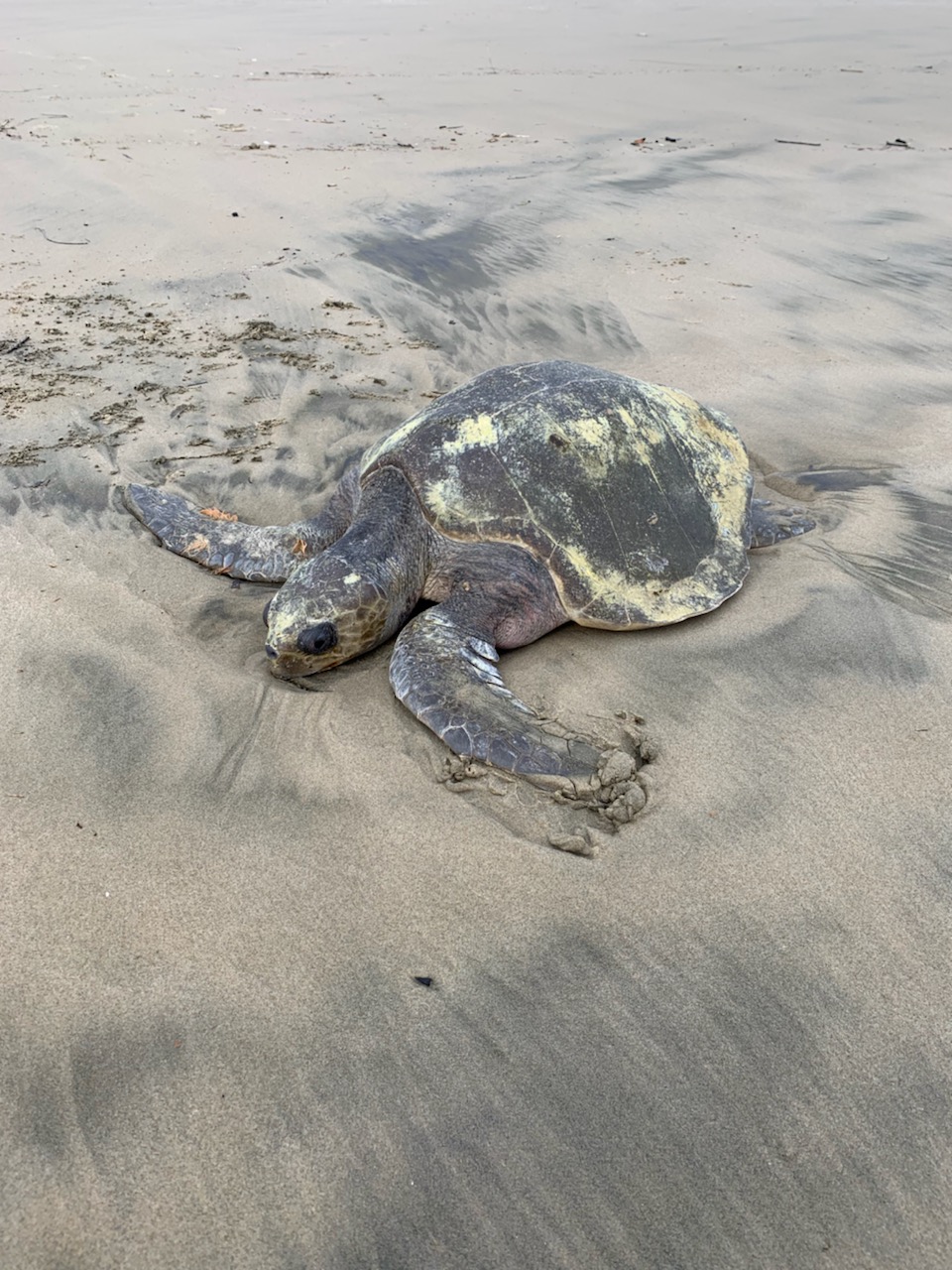 Newport, Oregon – It is with great sadness that we report of the death of the two olive ridley sea turtles despite strong Aquarium staff efforts toward their recovery.
The first sea turtle, named Donatello, stranded on Horsefall Beach in Coos Bay on Wednesday. The female olive ridley suffered from multiple breaks in her shell, blood-loss and severe cold-stun. While initial blood analysis showed no signs of infection, additional testing revealed severely compromised kidneys. Donatello likely succumbed to that and potentially other internal issues related to cold stun.

The second sea turtle, also a female olive ridley, stranded in Waldport on Saturday morning amid hazardous surf conditions. “While she appeared physically intact, cold-stunning itself takes its toll on the turtle’s internal organs,” said Evonne Mochon-Collura, Oregon Coast Aquarium Curator of Fish and Invertebrates. “As always with animals with sustained injuries, they have a lot of challenges through recovery. We submitted X-rays and blood samples for further analysis to determine her internal condition.”
Cold-stunned sea turtles present a myriad of complications that are difficult to diagnose and can remain hidden for some time. “The passing of the sea turtles had to be confirmed by rigor mortis, as a lack of response and heartbeat through a fetal doppler can confirm ‘no sign of life,’ but not death,” said Mochon-Collura.
Both sea turtles will undergo necropsies to determine exact cause of death. Multiple organizations, including the U.S. Fish and Wildlife Service, National Marine Fisheries Service and NOAA utilize stranding data and necropsy results for research and education on the endangered species.
While the odds of successfully rehabilitating stranded sea turtles are low, the Aquarium will continue efforts to save injured endangered species for the chance of boosting threatened wild populations. Lightning and Solstice are both olive ridley female sea turtles that were treated at the Aquarium before being released in Fall 2017. Their movements were tracked off known breeding grounds in Mexico this past Spring. Sea turtles are not found on Oregon or Washington beaches unless stranded. The Aquarium typically sees these extremely sick turtles in the winter, possibly due to the cold water temperatures, changing currents, and high frequency of harsh storms that wash the hypothermic turtles ashore. If you find a sea turtle on the beach, immediately note its location, remain nearby to observe it, and contact the Oregon State Police Tipline at 800-452-7888 or the Marine Mammal Stranding Network in Oregon, Washington, and California at 1-866-767-6114.
The Aquarium is open every day from 10:00 a.m. to 5:00 p.m. For more information visit aquarium.org or call (541) 867-3474.
The Oregon Coast Aquarium creates unique and engaging experiences that connect you to the Oregon Coast and inspire ocean conservation. An accredited Association of Zoos & Aquariums institution, this 501(c)3 non-profit organization is ranked as one of the top 10 aquariums in the U.S. Visit us at 2820 S.E. Ferry Slip Rd., Newport, OR. www.aquarium.org, 541-867-3474. Follow us on Facebook.com/OregonCoastAquarium, or Twitter.com/OrCoastAquarium for the latest updates.