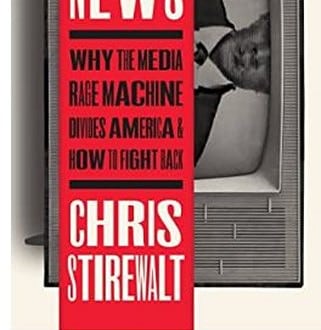 By Jim Heffernan
I was attracted to this book by the back story of the author, Chris Stirewalt. He was a political editor for Fox news and was fired for telling the truth. Maybe it was not exactly for telling the truth, but definitely for telling the truth too soon. His unforgivable sin was being the first one to predict a Joe Biden win in Arizona. Fox’s right wing audience simply could not abide someone telling them what they didn’t want to hear, even if it was the truth.
I was expecting a deep-diving tell-all book about Fox News, but what I got was a thorough history of American journalism, concentrating on the changes that have occurred in my lifetime. I’m glad it turned out that way. Tell-all books often seem a little shallow, but this book was very insightful and thought provoking.

Chris Stirewalt did not originally aspire to a career in journalism, it began in 1993 as a summer job to defray college expenses. Once exposed to the newsroom of a West Virginia newspaper, he was hooked. He progressed from a sportswriter, to a political writer and soon made the jump to television. By 2010, he became the head political editor for Fox news.
His career at Fox was rosy until the 2020 election when he told the Fox audience something they did not want to hear. Based on expert analysis by his team of election specialists, he was the first to announce that Joe Biden had won the election in the state of Arizona. For his “too-early” accuracy and truth telling, he was fired by Fox news.
Much of the book is devoted to a general history of journalism. Tragically, it is a history of the decline of journalism. Not that good journalism doesn’t happen now and then. But even when good journalism happens, it’s not appreciated as it should.
Our country was brought together by newspapers. The King’s Highway, ordered by King Charles in 1650, was completed in 1738 and stretched from Charleston, South Carolina to Boston, Massachusetts. By 1761, it connected Boston with Maine also. Printed newspapers travelled this road and undoubtedly united the colonists in their discontents. Literacy was the lubricant that enabled their unification.
Newspapers started to include pictures by the Civil War era, but putting pictures in newspapers remained complex and expensive until about 1935. (I am bemused that it was considered a marvel in 1935 that a picture of the Dust Bowl storm could be sent from Denver to New York in only 8 minutes.). Radio had entered the scene in the early 1920’s. Television appears in the 1950’s.
In the process, journalism, at first, required a high level of cultural literacy to convey the ideas of the time. People’s hunger for knowledge and news fueled the desire for literacy. The level of literary sophistication in simple Civil War letters to home is something I think most present-day English teachers will find astonishing.
As journalism changed, our need for cultural literacy diminished. Pictures, sound, and video often enhanced our understanding of events, but these additions to journalisms reduced our collective ability to critically reason and consider. I think Stirewalt’s excerpt from page 24 is a good summation.
“A citizenry in which more than half of American adults aren’t literatate at a level adequate to life in a free society will not be free for long. We are losing the common points of reference that allow us to discuss the abstract ideas to which our nation was built to aspire: equality, natural rights, human dignity, liberty, and self-determination. The American Creed requires written words and a common culture in which to understand them.
The news business once provided those things, albeit imperfectly. But after a struggle of more than a century to combine the accuracy of the recorded image with the deeper understanding of the written word, we find both increasingly out of reach. In their place we see subjective, politicized, emotionally manipulative coverage. We see that much of our news does not aim to make ideas understood, but to generate powerful feelings–often fear, anger, and resentment.”

Chris concludes the book with the summary that journalism is not likely to transform itself into an image of better days. The pull of dollars is simply too strong.
He believes the ultimate way out of the corners we painted ourselves into is by changing our habits and our viewpoints. He warns to beware when a story about our opponents or your own tribe lines up just perfectly with your own assumptions. That’s a sure sign the a “fundamental attribution error” is at work. “Fundamental attribution error” is what makes it so easy for us to believe that people who believe differently than us do so because they are morally or intellectually deficient. It could be we’re the ones that are wrong.
His final paragraph is a gem we should take forward with us in our hearts and minds.

“If you learn to start questioning your own assumptions when consuming news, you may learn to love your fellow Americans just a little more. You may come to see them as people like you. That could lead to mutual respect and goodwill. Who knows? Maybe even a politics of solutions, not perfomative outrage.”