UPDATE: BUS CRASH IN MANZANITA LOADED WITH ARMY NATIONAL GUARD MEMBERS
On September 16, 2019 at approximately 7:00 AM, Oregon State Police (OSP) and emergency personnel responded to a non-injury bus crash on US Hwy 101 in Manzanita. The bus was occupied by 46 Army National Guard members from the HHC 1-186 IN from Medford. The Tillamook County District Attorney’s Office will review the case for charges of Driving under the Influence and 46 counts of Reckless Endangering against the driver.
The preliminary investigation revealed the bus had departed from Camp Rilea and was en route to Portland. The driver, Kenneth Alexander, age 44, from Vancouver, Washington missed the turn onto US Hwy 26 outside of Seaside. The driver assured the passengers he knew the route to Portland and continued southbound on US Hwy 101. The passengers grew concerned over the driver using his cell phone and showing signs of impairment and at the same time the driver lost control of the bus and crashed into the sidewalk.
The driver was transported to local hospital for evaluation. No other injuries were reported. OSP was assisted by Manzanita Police Department, and the Tillamook County District Attorney’s Office. The City of Manzanita opened City Hall to the members of the National Guard until another bus arrived. 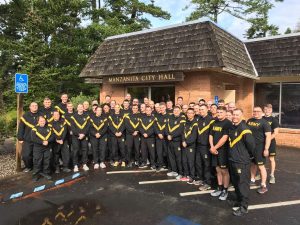