EDITOR’S NOTE: This commentary by Helen Hill was published in Street Roots* on Sunday June 21st, and they have shared it with the Pioneer as it provides background details regarding a social media fervor that has erupted over Helen Hill’s request that the Museum consider removing the statue. A petition has been started on change.org to remove the statue. The museum issued a statement last week about meeting with local tribes and reviewing the issues. See links at the end of the article.

The monument to Capt. Robert Gray has been seen by countless Oregon Coast tourists and locals for the past two decades.

By Helen Hill, for STREET ROOTS*
On the eastern shoulder of Highway 101, as it runs through the small coastal town of Garibaldi, stands a tall, imposing statue of Capt. Robert Gray. He is dressed in the traditional garb of an 18th-century sea captain, with a tri-cornered hat, big buckle shoes and a spyglass.

Gray is depicted standing atop a traditional cedar burial box carved with human hands and face, a sacred artifact used by Northwest tribal chiefs and shamans for storage of ceremonial regalia. Following the death of the chief or shaman, the box became the protector of the soul of the deceased.
The captain’s feet are spread wide apart on the ornate box in a stance of domination and victory over a vanquished people. 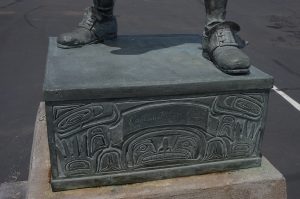 In the years following Gray’s visit to the area in the early 1790s, the Indigenous peoples whose box on which he stands — the Tillamook Coast Salish tribe — disappeared entirely from Tillamook County, where Garibaldi is located. Their demise was the result of enforced relocations, broken treaties, disease, old age, sterilizations and death overseas in two world wars.
For about 20 years, thousands of locals and tourists have passed by this statue every day. It has been photographed countless times. Though it is on private land owned by the Garibaldi Maritime Museum, it’s seen by all who traverse the Oregon Coast’s main artery.
Gray is widely hailed as the “discoverer” of the Columbia River, though for 12,000 years previous to his arrival, it was one of the most populated regions in North America, home to tens of thousands of members of the Chinook, Clatsop, Multnomah, Clackamas and Cascade nations. Gray is also credited with being the first to circumnavigate the globe in 1790. Many Pacific Northwest geographical features, high schools, scholarships, harbors and roads are named after him.
But, as with many American monuments, there is an untold story.
Gray has been linked to the infamous South Carolina triangle slave trade, having worked for slave traders Crowell Hatch and Samuel Brown. Following the abolition of that horrific trade, Gray outfitted a sailing ship bound for the Pacific Northwest, seeking sea otter furs. By many eyewitness accounts, his dealings with many Pacific Northwest tribes from Vancouver Island to Tillamook Bay was brutal and rife with murder, theft and the torching of villages.
In one well-documented instance, Gray kidnapped the son of the chief of the village of Opitsaht in British Columbia and ordered the entire village of 200 ornately carved ancestral homes burnt to the ground.
In July 2005, a descendant of Gray, William Twombly of Corvallis, journeyed to Tofino, British Columbia, to publicly apologize for Gray’s brutality. Twombly arrived in grand form, in a replica of the tall-masted Lady Washington ship. Present-day members of the tribe paddled out to meet him in cedar canoes. Several newspapers recorded the meeting, including The Seattle Times.
https://www.seattletimes.com/seattle-news/fur-traders-descendants-apologize-to-bc-indians/
Stories of Gray’s interactions with other tribes along the coast are similar. In Tillamook, in sight of where his statue now stands, he turned his cannons on the Natives who were rowing out to the ship. For many years following the incident, present day Tillamook Bay was known as “Murderer’s Bay.”
Among the other attacks Gray ordered was one “on a Chicklisaht Nuu-chah-nulth village in Esperanza Inlet north of Nootka Sound, killing seven and seizing the Natives’ sea otter furs,” wrote author Daniel Wright Clayton in his book “Islands of Truth, the Fashioning of Vancouver Island.”
“Gray was one of a number of captains who decided to use force to acquire furs,” Clayton wrote. “In Grays Harbor (one of many places subsequently named in his honor), Gray fired on a group of Chinooks, killing 20. Still later, in Clayoquot Sound, he killed or wounded at least 25 natives who were approaching his ship.”
In the light of our nation’s continued reckoning with our deep and overlooked roots of racism, I recently posted a suggestion on the Tillamook County Community Page on Facebook that the Garibaldi Maritime Museum consider removing the statue or putting it inside with signage that reflects the true history. Reactions were swift and vehement. After over 500 comments were logged in a few hours, the site administrator shut down the comment section. Many of the comments were angry, racist and insulting. Others advocated toppling the statue and throwing it in the bay.

One poster wrote, “Removing our country’s monuments doesn’t erase our history. It’s made our country what it is.”

Another wrote, “If you don’t like it don’t go to Garibaldi and don’t look at it. Never have I considered it a symbol of racism nor oppression. Just the history of our county and that of an explorer. It happened. Learn from it. Don’t white wash it.”

Others argued for the removal of the statue. A local nurse wrote, “We should not immortalize with glory those who built their lives and fortunes upon brutalizing, murdering, pillaging and desecrating the sacred.”

LaNicia Duke is one of Tillamook County’s very few black residents.
“This hit a nerve for people,” she told me. “I have tried to ignore the statue since I found out the history. I think we are at a crossroads. We are having to make life-changing decisions. When we take down these statues, it signifies that we are willing to turn the page.”

Denise Harrington, a teacher at Tillamook High School, told me via email that she uses the statue as a teaching tool.
“I use that statue in my class during a unit on genocide,” she said. “I show that genocide, and the tools used to commit it, live right here in our neighborhoods. I keep hoping the kids will get enraged enough to take action.”

I spoke with Christine Bacon, who serves as president of the governing board of the Garibaldi Maritime Museum. She said the board has long been concerned about the optics of the captain standing atop of the sacred Native artifact, and she said they would meet soon to discuss the fate of the statue.
“I am thankful this concern has surfaced,” she said. “We are genuinely looking forward to making it a teaching moment for the community.”

The board hoped to include representatives of the Grande Ronde and Siletz tribes in discussions.
I have since learned that rather than moving the statue inside the museum or getting rid of it entirely, the museum’s board is considering the addition of an informational plaque outside, near the statue, that explains some of the history.

And so, the debate rages on.