EDITOR’S NOTE: Fred Bassett provides an introduction to a year-long project collaboration with the Tillamook County Pioneer and Tillamook County Democrats. Launching the weekend of Oregon’s birthday – February 14th – the Celebrate Oregon project will be a regular feature here on the Pioneer. Celebrating Oregon’s Statehood – through Stories & Images – As we celebrate Oregon’s Birthday on February 14th, let’s celebrate the things that make Oregon special (and especially this area on the upper left edge, called Tillamook County.)
Just like the early settlers on the Oregon Trail, tell us about your path to Oregon, or share with us your “favorite place” in Oregon (and in Tillamook County.) What brought you here, and why do you think this place (or other places) in Oregon are so special?
This could be a story (about 250 words), accompanied with photo(s); or send us a video (1 minute or less).
We will gather these stories and share them regularly on the Tillamook County Pioneer website and social media, the Tillamook County Democrats website, and other displays throughout 2021.
Send your stories and photos to editor@tillamookcountypioneer.net or marymcginnis05@gmail.com
If your video is too large to email – we suggest you use WeTransfer.com – a free service for transferring large files.
If you have questions, please email Pioneer editor Laura Swanson at editor@tillamoookcountypioneer.net.
Here is Fred’s fascinating story about his family’s path to Oregon – tell us (or show us) yours!

By Fred Bassett, Chairman, Tillamook County Democrats
Sunday, February 14, 2021 is Valentine’s Day, or course. But, it also marks the 162 anniversary of Oregon statehood. With all we’ve been through together over the past year – the pandemic, the wildfires, the most divisive and politically unsettling election in any of our lifetimes, we – Tillamook County Democrats, in cooperation with the Tillamook County Pioneer online newspaper – thought it might be fun to have a celebration of Oregon’s history, it’s people, and it’s places. Does that sound a little ironic?
Maybe it is. As I look back at my own family history in this place we call home, which is closely coupled with the history of Oregon itself, irony – a literary device in which there is a contrast between expectation and reality – is very much at play.

My great-great grandparents, Joseph and Mary Myers, packed their five young children in a covered wagon and set out with 37 other pioneers in one of the most harrowing and disastrous adventures in Oregon Trail history. The year was 1860, one year after Oregon achieved statehood.
Although all seven of my immediate Myers family members made it to Oregon, their number was over half of those who survived this historically torturous journey. In fact, their family was the only one that survived in tact the events that occurred near the border of Idaho and Oregon that fall.
I would love to tell their entire story here, but, it is a subject for a much larger space and a much longer time. Let me summarize by telling you that the Myers family survived:
•A three day and night siege of their circled wagons;
•A harrowing escape under the cover of darkness leaving their wagons, livestock, food, and all their personal belongings behind;
•A 90-mile trek on the banks of the Snake River carrying their children on their backs, while enduring continued attacks;
•And, more than a month camped on the banks of the Owyhee River with so little food that they were forced to exhume the bodies of those who had died to make soup for sustenance.
They were ultimately rescued, moved to the Willamette Valley and lived to tell the story I just mentioned. Joseph’s and Mary’s first born child in Oregon was my great grandmother Genevieve.
The ironic part of this story is the fact that, although it was shared and celebrated in news reports, military documents, at least one book, and in my own family’s often-told history, none of these sources discussed or even intimated that our own history of survival, settlement and success is also the story of the devastation and annihilation of the Bannock People.
The Bannocks, on the other side of the three-day siege that devastated my ancestors’ wagon train, had celebrated traditions of hunting buffalo in Montana mountains, of fishing Salmon in the waters and tributaries of the Snake River, of trading missions with other first nations in this region, and of a rich cultural history of pottery and beadwork dating back possibly 10,000 years.
By the time my ancestors, however innocently, travelled through this region, the Bannocks had been reduced to marauding bands forced to depend on begging, theft, and treachery to survive. The damage – through disease and devastation of buffalo herds – had already been done. History tells, however, that one result of the actions that nearly stopped my own family’s history in September of 1860, was further onslaughts on the Bannack People, culminating in the Bannock Wars of 1878 which virtually spelled the complete demise of this once great nation.
I’m relating this because, in our celebration of what Oregon means to each one of us, we must recognize and honor those whose Oregon history goes way beyond our own short story. My family will continue to celebrate the courage and farsightedness that brought our ancestors to this wonderful land. But I cannot, will not, simply pass on these stories without recognizing and apologizing for the blindness that allowed my forebears to see only green pastures, clean water and fresh futures, while stumbling over the corpses of proud people who came before.
Although my family’s history is only recent in Tillamook County, all of us have a lot to correct in our telling of this region’s story, as well.
Celebrating Oregon is important, maybe more important now than ever before. But, let’s all do our parts to insure that we tell the whole ironic story. 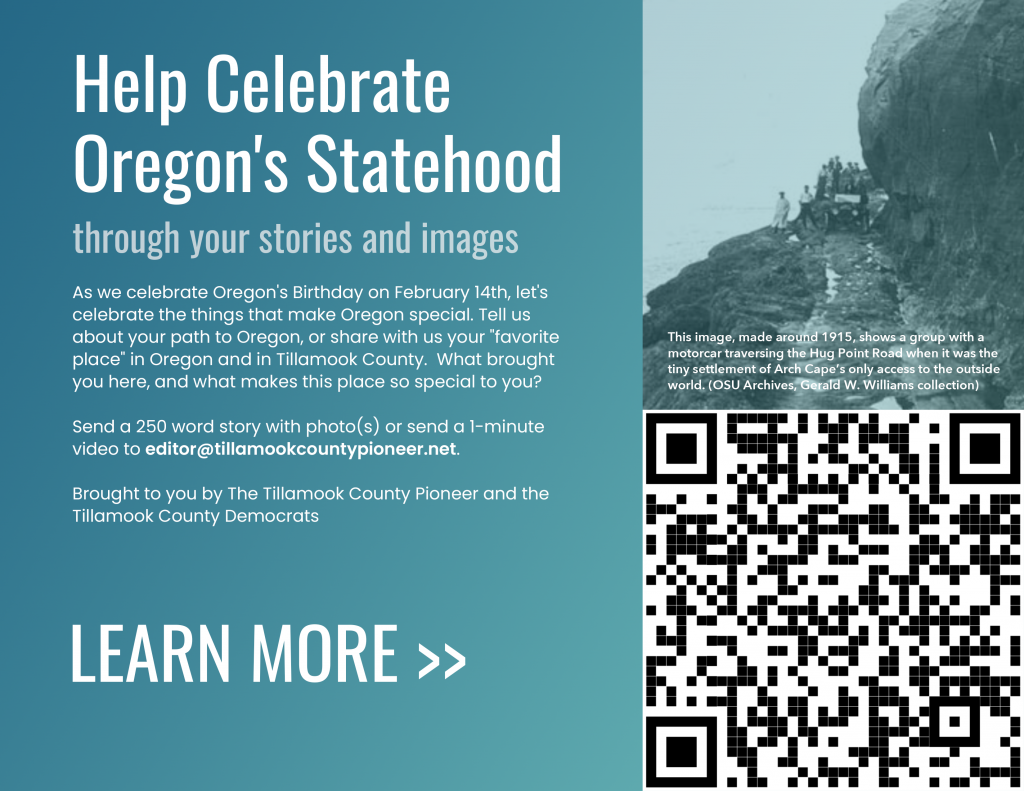