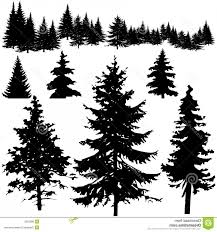 By Judith Yamada, Kitchen Maven
The celebratory tree we refer to, as a “Christmas” tree was originally a Pagan tradition and symbol of life. After lots of tree burning, murder and turmoil, it was eventually improvised to become a symbol of Christianity.
Referring back to the origin of tree celebration, they were never cut down to decorate great rooms or cabins or huts. The rituals celebrated nature, the world around us, and all it provided. Cutting down trees was punishable by death. Pagans believed that the trees had souls and that spirits resided in each tree. Destroying trees would leave the spirits homeless.

Anyone caught committing the heinous act of chopping down a tree was disemboweled and tied to the tree with his or her own entrails. Yikes! Those Pagans were serious about their beliefs, just as people of religion often are today. Mess with their religious icons and beliefs and they’ll mess with you.
As you probably know, Christians burned hundreds to thousands of trees, hoping to put a stop to the Pagan tree worship, lure them away from their Pagan ways and draw them to the Church. It didn’t work. Neither did the Easter egg fiasco, but that’s another story.
Eventually, some clever and cunning Christians decided to do the easiest thing possible, stop fighting and start joining. They adopted the tree custom as part of the Christmas celebration.
Those progressive Christians started decorating trees of their own. With their customs and icons in tact, and fear of reprisal always imminent, many Pagans slowly found their way to the Christian Church. Suddenly, they all had something in common. Yippee!
Good thing the Pagans stopped disemboweling tree choppers or there’d be a lot of people tied to trees even today.
A fitting topper for a live tree would be a live bird, I think. But, that’s been done before.
Happy whatever holiday you prefer.
Here are some “lighter” holiday recipes from Judith’s “Kitchen Maven” collection … was that a partridge in a pear tree? 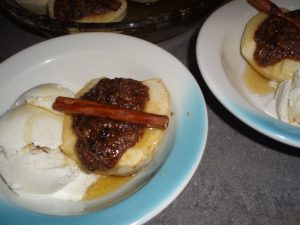 Combine almond flour, 3 Tablespoons brown sugar and pumpkin pie spice; stir in melted margarine or butter. Set aside.
Peel and core the pears, being careful not to break them. They should be firm enough to handle easily. A melon baller or small spoon works well for coring. Lightly grease an 8-inch square, oven safe, glass, baking pan. Lay the pear halves in the pan, cored side up. Brush or squeeze the lemon juice over the cut side of the pears.
Using your hands, evenly fill pear half cavities with the almond crumble, pressing it over the top.
Combine rum (or apple cider), remaining 2 Tablespoons brown sugar and water. Whisk to combine. Pour the rum mixture into the bottom of the pan without getting any on the pears. Cover with foil. Bake in preheated 350 F., oven 25 -30 minutes. Uncover and bake 5 additional minutes. Serve warm with a dollop of vanilla ice cream or vegan frozen vanilla dessert. 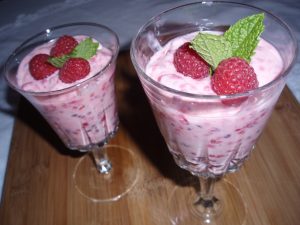 This is ultra quick, pretty, creamy and full of berry goodness.
Berry Crème Mascarpone
4 servings
This original recipe is light and fruity with cheesecake flavor and mousse like appeal. Takes just a few minutes to prepare, so you can sit down with the rest of the crew and relax in the glow of holiday cheer.

In a 6-cup bowl, lightly combine mascarpone and agaves nectar (or honey) with a whisk. Stir in lemon zest and vanilla extract. In a separate bowl, lightly crush 2-cups fresh raspberries. Add crushed berries to mascarpone mixture, folding in gently. Transfer raspberry crème mascarpone to 4 attractive dessert dishes. Top each with 3 whole fresh raspberries and 2 small mint leaves. Refrigerate up to one hour before serving.
*Fresh sweet strawberries may be substituted for raspberries; but slice them thinly or quarter them before lightly crushing. Put aside 4 strawberries for decoration.