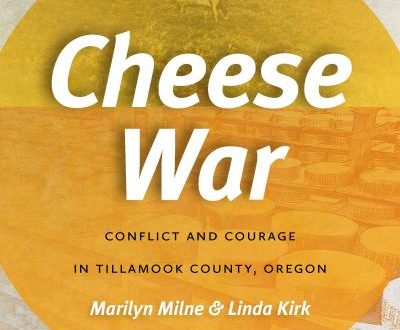 Cheese War: Conflict and Courage in Tillamook County, Oregon
Authors- Marilyn Milne and Linda Kirk will be at the Port of Tillamook Bay Conference Room at 4000 Blimp Blvd. on Sunday June 12th from 2 to 3 pm to discuss their new book.
Here’s the summary from OSU Press:
In the 1960s, Tillamook County, Oregon, was at war with itself. As the regional dairy industry shifted from small local factories to larger consolidated factories, and as profit margins for milk and cheese collapsed, Tillamook farmers found themselves in a financial crisis that fueled multiple disputes. The ensuing Cheese War included lies and secrets, as well as spies, high emotion, a shoving match, and even a death threat.

On one side of the battle was Beale Dixon, head of Tillamook County Creamery Association. Dixon set up a scheme to offer low-interest, low-collateral loans from TCCA’s largest member cooperative, Tillamook Cheese & Dairy Association, to the supermarkets that stocked Tillamook products. Dixon argued it was a cheap, easy way to ensure good will—and continued purchases—in a tight market. On the other side was George Milne, a respected farmer and board president of the cooperative. Milne supported his board’s decision that loans would require board approval and bank oversight. Dixon mostly ignored those requirements.

The discovery of more financial irregularities soon spiraled into a community-wide dispute, exacerbated by a complex web of family and business relationships. The Cheese War raged for the better part of a decade across board meetings, courtrooms, and the community itself. While largely unknown outside of Tillamook County, the Cheese War was so divisive that some families remain fractured today.

Sisters Marilyn Milne and Linda Kirk, children of the Cheese War, saw how it absorbed their parents. As adults, they set out to learn more about what had happened. The authors conducted years of research and have integrated it with tales of their experiences as farm kids living through the all-consuming fight. As Americans become ever more interested in food supply chains and ethical consumption, here is the story of the very human factors behind one of Oregon’s most iconic brands. 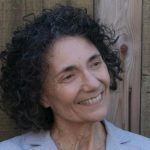 Marilyn Milne grew up on a Tillamook dairy farm and is now a public relations consultant living in the Willamette Valley. (photo by Richard Kirk) 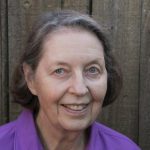 Linda Kirk grew up on a Tillamook dairy farm. She now lives on a farm in southwestern Oregon and is retired after a career as a teacher and librarian. (photo by Richard Kirk) 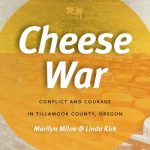 The book is available from OSU Press for $24.95. https://osupress.oregonstate.edu/book/cheese-war