In August 2020, the Tillamook Board of County Commissioners allocated $131,000 in CARES Act Funding for child care expansion in Tillamook County. The Tillamook County Early Child Care and Education Task Force identified four key areas for spending; tuition reimbursement for families, PPE, facility improvements, and supplies.
The Tillamook County YMCA served as the fiscal agent and grant administrator for this funding.
The task force would like to thank the YMCA for their support. The YMCA worked directly with providers to explain the application process, collect all necessary materials, coordinate with county officials, and distribute checks to providers.

Thanks to this funding, 17 providers across Tillamook County received funds and four new providers opened during this time. In the infographic below, you can see a map with the general locations of all of the providers. The number of children served increased fourfold, from 62 in April
to 230 in December. The average grant award was around $8,500 for centers and $6,000 for inhome providers.
This funding was a success thanks to the collaboration of the members in the Tillamook County Early Child Care and Education Task Force and Tillamook County staff. The task force is grateful to the Tillamook Board of County Commissioners for supporting child care providers throughout
Tillamook County and for the YMCA for distributing all of the funds. 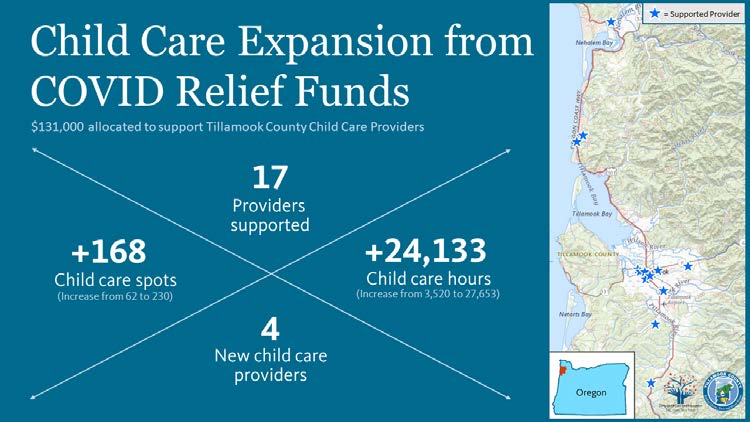