By Julie Chick for the Tillamook County Pioneer
Imagine … a lineup of student athletes, some with intellectual disabilities and others without, all using their unique strengths to build team successes … This is exactly how it looked at Neah-Kah-Nie’s first participation in Special Olympics Unified Sports at the February 1st basketball tournament at Tillamook High School. Four school districts from the region competed against while simultaneously offering support to one-another in the spirit of “Choose to Include”.

Unified Sports is a part of Special Olympics National Unified Champion School campaign that is meant to engage schools to create climates of inclusion, acceptance, respect and human dignity for all students with and without intellectual disabilities. The goal is to create schools and communities that welcome all people, and that feeling of inclusion was well represented at the Saturday tournament.
Students, Delainy Lea and Kellen Shelley, from Tillamook HS organized and hosted the day-long tournament complete with referees, snack bar, time clocks, and bleachers full of delighted parents, caregivers, friends and community members. Neah-Kah-Nie began initial discussions of Unified Sports participation in the fall of 2019 under the guidance of coaches, Mike Wantland and Jenni Stinnett. NKN students played four of the six tournament games and showcased grace, patience, athleticism, and lots of laughs throughout the day – perhaps even a tear or two of joy. The game looked like any other youth basketball game with typical skills on display such as good defense, jump-shots and three pointer attempts mixed in with a few moments of glam-and-show the Harlem Globetrotters would be proud of! Teammates used their natural intuition to know when to step forward and when to step back and allow the ‘spotlight’ to others. 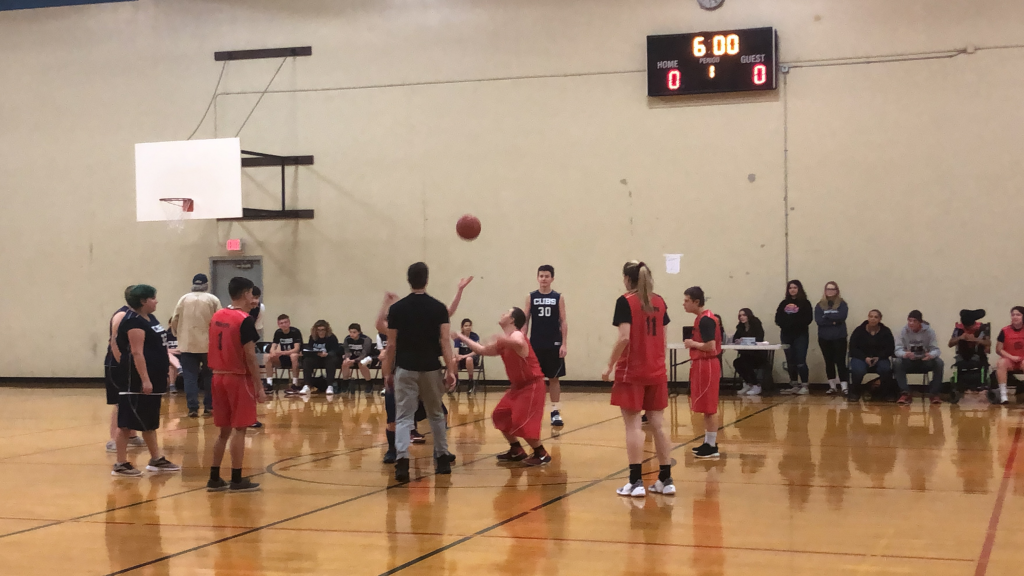 Stacey Dills, NKN Special Education Director said while smiling brightly, “Watching our first Neah-Kah-Nie unified basketball team play was absolutely one of the top experiences I’ve had in my special education career. It wasn’t about the score, but was about supporting the participation of all players and finding joy in the process for our athletes and their partners.” 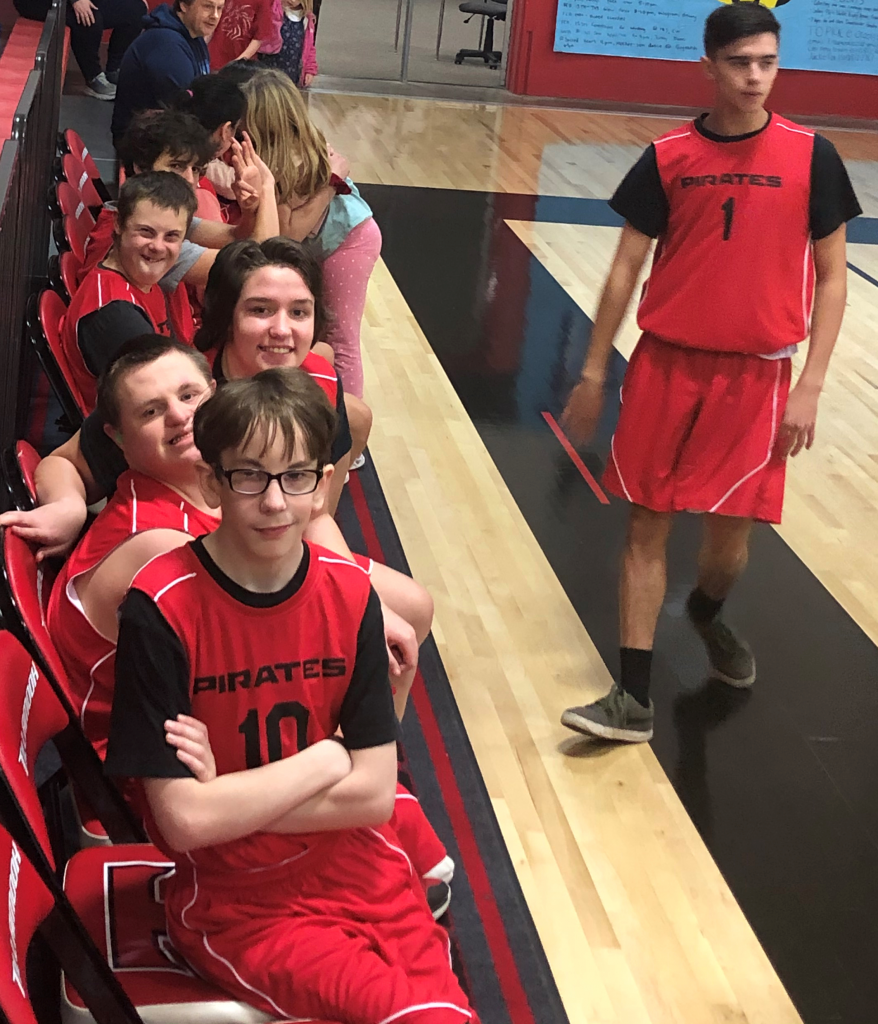 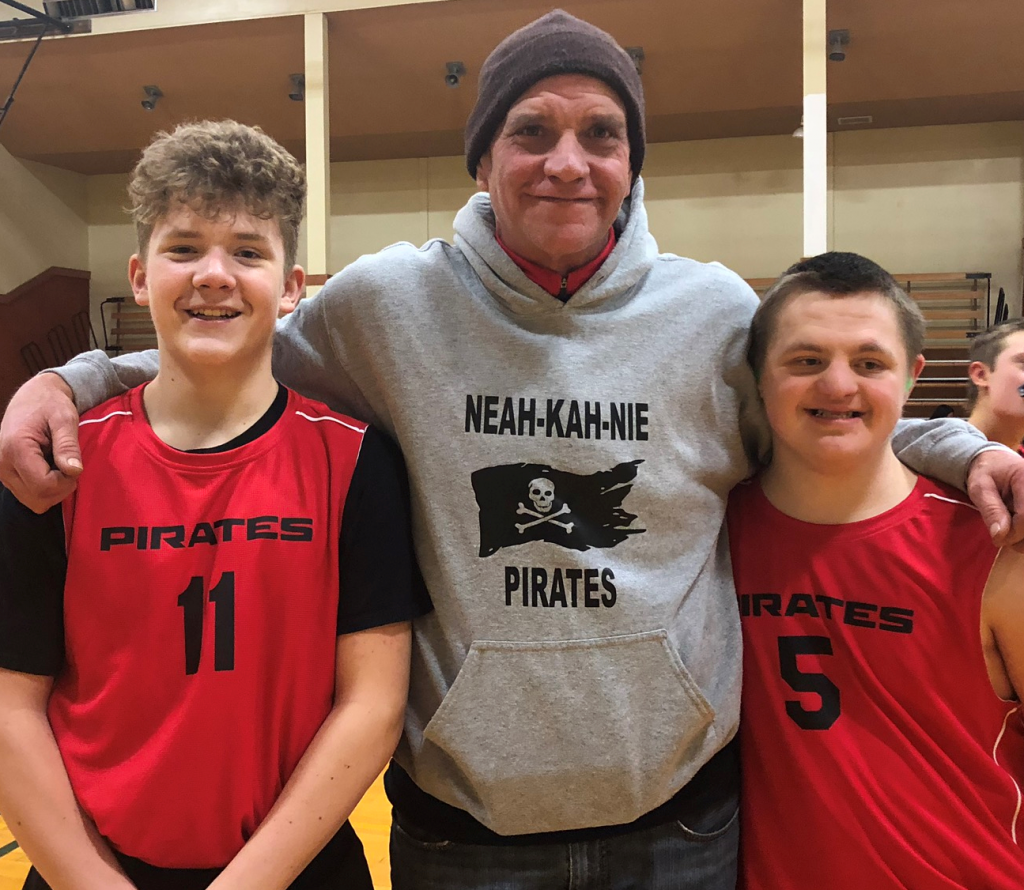 Unified Sports offers opportunities for all students to build relationships, learn about one another, and understand that disability is a natural part of any community. We all have strengths to share and the Unified Champion School campaign encourages all the students to the be agents of change of attitudes. Saturday’s tournament did not fall short.

“Participating in the basketball tournament was a true community building experience for all. Pure joy radiated from the court and the stands,” said Life Skills teacher, Carlotta Roddy, “I see these connections spilling over into our school environment.”
Leadership students at Neah-Kah-Nie held meetings in the fall to discuss the possibilities and agreed to take on the opportunity to give Unified Sports a chance in their school district. The Mudd-Nick Foundation sponsored the purchase of uniforms and snacks for the tournament participation, and parents and families showed up to offer day-long support from the sidelines.
As for the future of Unified Sports Roddy says, “Our Unified Leadership team made up of teachers, students, and parents will be meeting soon to plan our next steps.” The Mudd-Nick Foundation, whose mission is to broaden the horizons of all children, has provided the resources to explore what it might take to become a Unified Champion School at the Neah-Kah-Nie. “I look forward to supporting the expansion of the unified sports program, as well as working toward Neah-Kah-Nie High School earning the distinction of becoming a Unified Champion School,” says Dills.