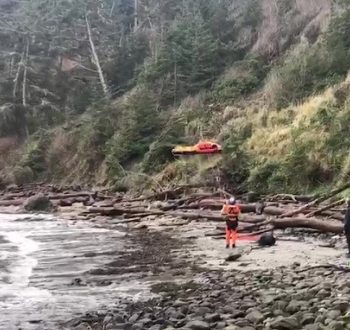 CAPE ARAGO, Ore. — The Coast Guard medevaced a hiker near Cape Arago State Park Saturday afternoon after he reportedly fell down a cliff and sustained injuries.
Watchstanders at Coast Guard Sector North Bend received an agency assistance request at 10:50 a.m. Local emergency responders had arrived on scene but were unable to safely transport the injured hiker from his remote location.
At approximately 11 a.m., an MH-65 Dolphin rescue helicopter crew diverted from a training mission to respond. The aircrew refueled at Sector North Bend before arriving on scene at Cape Arago.

The MH-65 aircrew landed on a nearby beach at approximately 11:45 a.m., allowing the rescue swimmer to disembark and assess the situation.


At 12:30 p.m., the aircrew hoisted the hiker into the helicopter due to the challenging terrain.

The hiker was transported to awaiting emergency medical personnel at Sector North Bend where he was reported to be in stable condition.

The Coast Guard urges public, whether on the water or exploring trails on land, to remain aware of your surroundings and respect your limitations. Always have a reliable means of communication to reach emergency responders.