Watchstanders at the 13th Coast Guard District command center in Seattle received a report at 9:21 p.m. Friday that the 66-foot fishing vessel, Lodestar, lost all means of propulsion and was stranded in a storm battling 8-to-12-foot waves and over 40-knot winds approximately 180 miles offshore Coos Bay.

The cutter crew arrived on scene at 1 p.m. Saturday and placed the fishing vessel in tow. 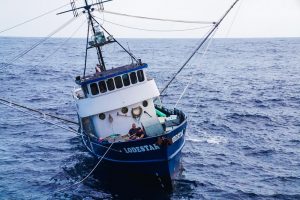 “I’m extremely proud of this crew,” said Capt. Stephen Adler, the commanding officer of Stratton. “They showcased remarkable proficiency and seamanship rescuing these two fishermen, who were subject to the perils of the sea, far from land. Yesterday, the crew certainly lived up to her ship’s motto of ‘We Can’t Afford Not To.’”