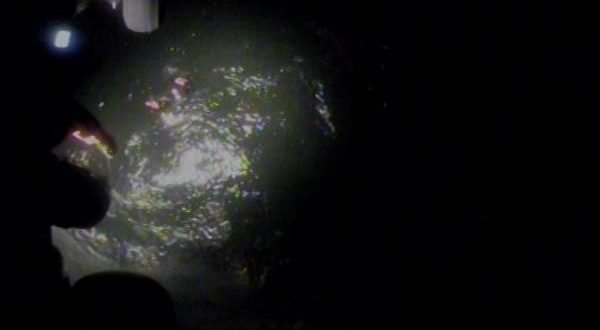 A Coast Guard aircrew hoisted two people and their dog early Saturday morning, Feb. 29th from their boat several miles off the coast of northwest Oregon.
On Friday, Feb. 28th at 2:30 p.m., watchstanders at the Coast Guard Sector Columbia River Command Center received notification that a 56-year-old female and a 55-year-old male aboard a 44-foot recreational boat were beset by weather and had concerns about crossing the bar.
A Coast Guard Station Cape Disappointment 47-foot Motor LifeBoat crew launched and arrived on scene at 3:45 p.m. and helped assess the situation.

The rescue crew determined that it was unsafe to tow the vessel across the bar due to stability issues and deteriorating conditions. The crew instructed the boaters to don life jackets and remain offshore until weather improved. The rescue crew then returned to base. The boaters were kept on a communications schedule with the sector watchstanders.
Another rescue crew from Station Cape Disappointment aboard an MLB launched several hours later and arrived on scene at 2:45 a.m., Saturday. It was again determined too unsafe to tow the vessel.
On scene weather conditions at the time were 25 mph winds, 12-foot seas, air temp of 42 degrees F, and the sea temp at 48 degrees F.
A hoist was decided as the safest method to rescue the boaters. The MLB crew remained nearby to assist with the rescue.


A Coast Guard aircrew aboard an MH-60 Jayhawk from Sector Columbia River launched and at 4:15 a.m., the crew arrived on scene. The rescue swimmer was lowered to the vessel and assisted the woman who was hoisted into a rescue basket.
Due to worsening conditions, the rescue swimmer had the man and dog enter the water to be hoisted into the helicopter. The man and dog were then safely hoisted.
At 5:45 a.m., the helicopter landed back at Sector Columbia River. The survivors declined medical services and were picked up by a relative.
The abandoned vessel is currently offshore near the coast of Seaside, Oregon. A special marine information broadcast has been issued to alert boaters in the area.