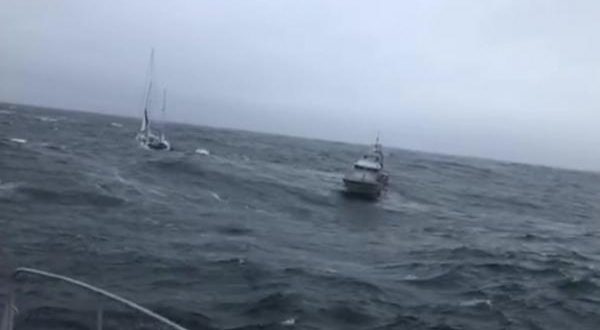 SEATTLE — The Coast Guard rescued five adults aboard a disabled sailing vessel Wednesday, October 16th, 20-miles west of Yaquina Bay, Oregon.
At approximately, 5:15 a.m. watchstanders at Coast Guard Sector North Bend received a distress call from a 50-foot sailing vessel that the individuals were struggling to make way to safe harbor and were unsure if they could cross the bar.
At 7:30 a.m., a boatcrew aboard a 47-foot Motor Lifeboat from Coast Guard Station Depoe Bay arrived on scene and took the sailboat in tow.

The crew towed the vessel to an area two miles west of the Yaquina Bay entrance, where they met with two other MLB crews from Coast Guard Station Yaquina Bay.
The rescue crews assessed the situation and decided it would be best for the five individuals to enter the water after donning survival suits.
Upon entering the water, a crew from Coast Guard Station Yaquina Bay aboard a MLB immediately picked the individuals up and brought them aboard. They were then transported to South Beach Marina with no medical conditions.
At 5:30 p.m., the vessel was safely moored in Newport, Oregon.
Sea conditions were reported as 10 to 20-foot seas offshore with winds of 35-40 knots.