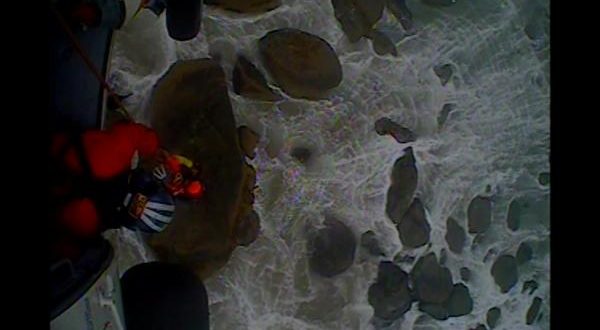 EDITOR’S NOTE: It was a busy day on Neah-Kah-Nie Mountain. There was also a fall from one of viewpoints at MP 41, and rescue mid-morning on Sunday May 19th. We will provide a report as soon as we receive information and updates.

WARRENTON, Ore. — The Coast Guard rescued two tourists who were stranded by a high tide on the south side of Indian Beach within Ecola State Park, Sunday afternoon.
An aircrew aboard an MH-60 Jayhawk helicopter, from Coast Guard Sector Columbia River, hoisted a woman and her boyfriend and transported them to emergency medical services at the Ecola State Park parking area where no injuries were reported.

Coast Guard watchstanders at the Sector Columbia River Command Center received a call from Seaside dispatch at 11:57 a.m., who reported the distress situation. The aircrew immediately launched and the aircrew arrived on scene at 12:32 p.m.


The aircrew conducted the first hoist of the female who was being hit by waves at 12:43 p.m. The next hoist occurred at 1:03 p.m., which was of the boyfriend who climbed up some rocks to attempt a rescue but became stranded himself.
Both individuals, who are foreign nationals, were transferred to EMS at 1:16 p.m., checked out and released.