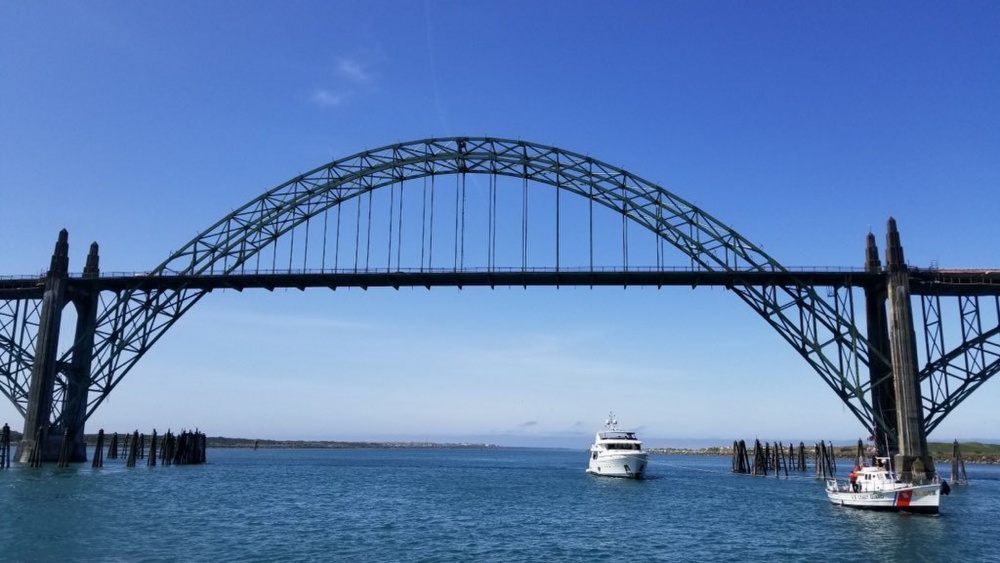 NEWPORT, ORE. — Coast Guard crew members, aboard a 52-foot Motor Lifeboat towed a disabled 93-foot motor yacht, to Newport Harbor, Saturday.
The Station Yaquina Bay crew aboard the 52-MLB Victory, made the ten hour tow of the yacht, Watta Ryde, and moored it safely with no injuries or environmental impact.

Coast Guard Sector North Bend watchstanders received a report at 9:41 p.m., Friday, from the Cayman Island flagged motor yacht, that the vessel had experienced engine failure and was anchored 2 miles outside of the Siuslaw River Bar.
There were three passengers reported aboard, two U.S. and one Canadian citizen. None had reported any injuries.
Watchstanders calculated that the vessel’s gross tonnage could only be towed by one of four Coast Guard 52-foot MLBs.


The Victory crew members made the 38-mile transit south and arrived on-scene at 1:45 a.m., Saturday.
Taking the yacht in tow, which was nearly twice the size of the Victory, the crew transited back north to Newport, where the vessel was safely moored.

The 52-foot MLB is uniquely located in the Pacific Northwest, because they are the only surf-capable boats that also have the horsepower required to tow much of the larger vessels in the region, commercial fisheries especially.
There are only four in active duty and they are the only Coast Guard vessels under 65 feet with names. They are stationed at Grays Harbor and Cape Disappointment, Washington, and Yaquina Bay and Coos Bay, Oregon.
-USCG-