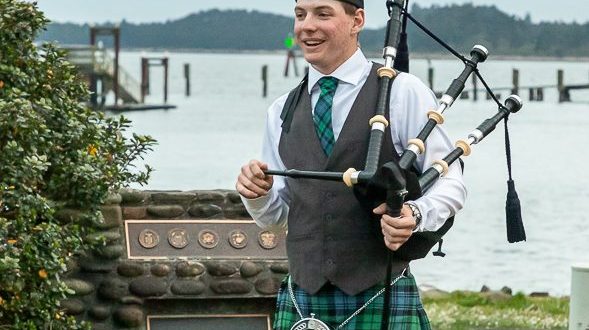 By Laura Swanson
Photos & Video By Don Backman
There have been videos of a young man playing the bagpipes at sunset at the Rockaway Beach Wayside, and then a notice appeared on social media about “Bagpipes at Sunset, Coast Guard Way, Port of Garibaldi.” I have to admit – I love bagpipes! There’s just something about that sound and especially with the backdrop of Tillamook Bay. On Monday April 19th, a group gathered around the Lost at Sea Memorial Park on Coast Guard way at the Port of Garibaldi, just outside of the lower Coast Guard Station, and as the Coast Guard prepared to do evening colors, he began to play. The bagpiper is 18-year-old Caleb Zigmont, originally from Kenai, Alaska, a Coast Guardsman who came to Tillamook right out of training (the next day after, no day off between) on November 21, 2020.

Caleb has been playing bagpipes for about a year, he started last May. His grandfather plays and is teaching him how to play. He mentioned that his mother and grandfather were there. He practices an hour a day, often in the gazebo at the upper station. He practices at other places in the area as well. He also plays at memorials. He wears his grandfathers kilt which is 50 years old, and wears a Spurran (the metal disc hanging from his waist) with his family coat of arms. He would like to audition for the Coast Guard bagpipe band.
About 15 to 20 people came out and a number of people were also watching from their RV’s in the RV park; groups were widely spaced around the area being COVID safe. 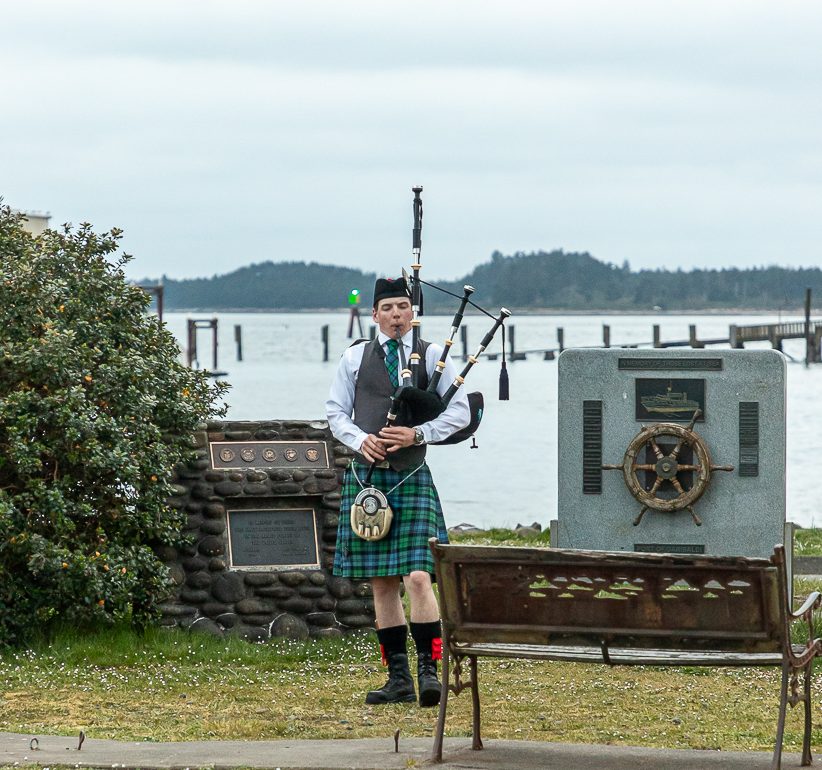 “It is so refreshing to see such a young man following his passion. Reminding us of a culture and life unlike our own. I was taken back to a time when pipers would visit Garibaldi days and pipe through the town in the parade. And there were a lot of them. The sound of the bagpipe resonates in my soul. Thank you Caleb. I just loved it…so special,” commented one of the attendees.
Here’s Caleb’s performance, and watch for more announcements about Caleb’s performances around the area. To contact Caleb, message him on Facebook.