The Oregon Shores Conservation Coalition has announced that the new volunteer coordinator for the group’s CoastWatch Program is Jessica (Jesse) Jones. She replaces long-time coordinator Fawn Custer, who is stepping into a new role as CoastWatch citizen science trainer.
CoastWatch is a 26-year-old program through which volunteers adopt one-mile segments of the Oregon shoreline, monitoring for both natural changes and human impacts. More than 1,500 “mile adopters” participate, and every mile of Oregon’s coast has at least one adopter. The program also organizes a number of special citizen science projects.

Jesse Jones, who is based in Astoria, is a lifelong Oregonian (and nearly lifelong north coast resident) and longtime advocate for the waters of the Pacific Northwest. She has managed large and small habitat restoration projects, engaged countless land owners in land conservation, and worked alongside youth of all ages in the natural world. Notably, given that it will be her responsibility to organize CoastWatch efficiently, she spent four years as executive director of the North Coast Watershed Association, and earlier served as executive director for the Vernonia Community Learning Center. 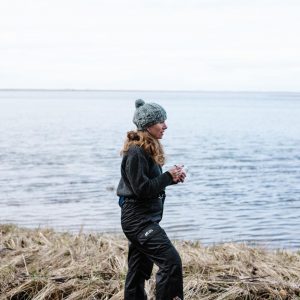 In 2015, Jones started volunteering for the Surfrider Foundation, leading their Blue Water Task Force to its new home at Seaside High School, where students now collect and process ocean water and post results. She is a CoastWatcher herself, a naturalist and private guide for the Haystack Rock Awareness Program, chair of the Surfrider Foundation North Coast chapter, and chair of the non-profit organization, Pelican Science, which she helped to found. She is also a collage artist, poet, and bossa nova musician.
Jesse envisions a near future where citizen scientists play a major role in shaping public policies and informing the individual actions of people around the planet—a vision which fits perfectly with CoastWatch’s mission. In her new job with Oregon Shores, she hopes to inspire a new generation of volunteers who see themselves and CoastWatch as a critical part of a global movement collecting and sharing the stories of our beaches and oceans.
For more information about CoastWatch, contact Phillip Johnson, who directs the program as Oregon Shores’ executive director, at (503) 754-9303, phillip@oregonshores.org. Contact Jesse Jones at jesse@oregonshores.org.