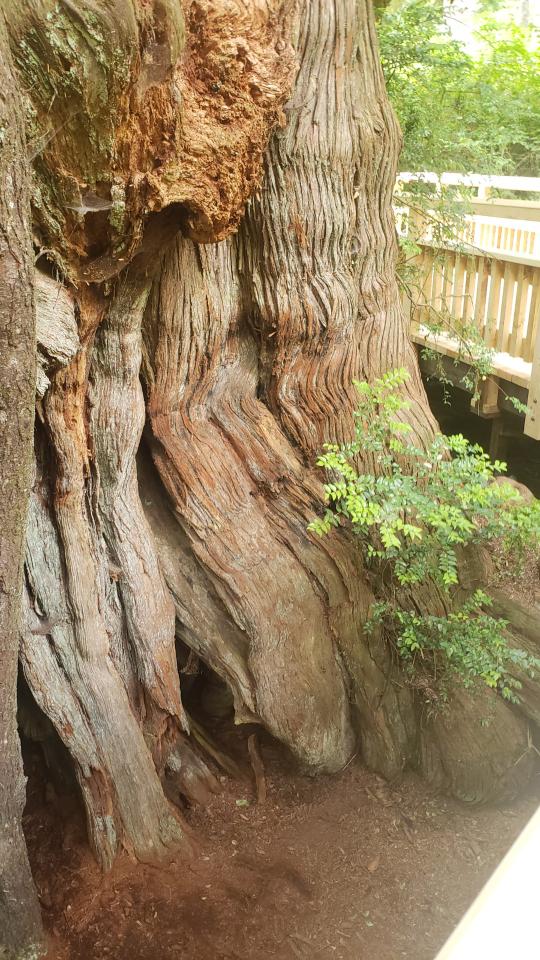 By Laura Swanson
Last weekend at this time, arborists and the City of Rockaway Beach were determining the best way to remove graffiti that was found on the Old Growth Cedar in Rockaway Beach’s Nature Preserve south of town. The graffiti found on Friday July 3rd was removed Monday morning July 6th by Rockaway Beach public works staff. The social media fervor and outrage over the graffiti incident was evident and unanimous in it’s condemnation for such an act upon a revered tree. There was little discussion about the nature of the message, and many agreed that it was unlikely to be intended to support current racial justice movement it declared. The rallying behind protection of this 500+ year-old tree is common ground where all can agree. Someone wondered, “What if we showed this much empathy for our neighbors experiencing racial injustices as we do for this tree?”
One of the eloquent posts came from Dawn Sea Kahrs and her 11-year-old son.

Dawn Sea Kahrs, on Facebook, noted: “From the heart and wisdom of my 11 year old brown-skinned son, ‘If you want to send a message out to somebody that is important, like Black Lives Matter, put it in a spot that’s not going to make people angry. Putting it in a spot like a 500 year old tree is going to make people angry, and I don’t honestly blame them, because that’s Natural and Sacred, and it took a lot of time to make the tree – and then you ruin it with something like that.’
Dawn continued, “We just visited (the remains) of another local Sacred tree this July 4th weekend together in appreciation of nature…I was so disappointed and heartbroken that someone would do this…
My son happened to see the pic of the post this evening on my phone, and those were his comments about it.
Black lives do matter. Defacing that beautiful tree is terrible. And in all likelihood, although it’s a guess…it was probably done by someone who wants to fuel anti-BLM sentiments, as has been the case with enormous quantities of defamation of both public & private property across the nation by those opposing the movement, without regard for affirming equal human rights for all, and the lack of acknowledgement of the suffering that our black and brown brothers and sisters (including Native American and Mexican/Hispanic, as well as African heritage) have endured over far, far too long.”
This Mom of a brown-skinned boy:
1. Supports the movement of equality, reparation, and kindness for ALL.
2. Honors Nature and each others’ hard-earned and loved-up businesses and livelihoods. Life has been hard enough – especially in this pandemic-induced chapter.
3. See smoke beyond the mirrors, and the truth behind the imperfect message.
4. And…again…be KIND! #KindnessMatters

When local residents, ventured out on the boardwalk on Tuesday, there is no sign of the affronting words. The beautiful boardwalk, a shining star for accessible pathways in Tillamook County was explored by Luvine Treharne.


The Rockaway Beach Police are still investigating the graffiti incident and ask that local residents in the area review any security camera footage. “We appreciate all the positive support from the community to reduce criminal activity in the city as well as protect the natural resources in our area,” said Chief Stewart. “We are currently working on a viable plan that will aid in crime reduction and a funding mechanism. We will look to the community for additional support if it’s needed.” If you have any information to contact Rockaway Beach Police at 503-374-1726.