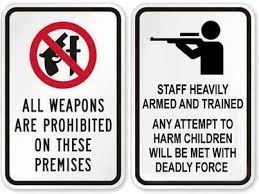 EDITOR’S NOTE:  This commentary was Isabeal Donohue’s presentation to the Tillamook School District board on Monday Feb. 14th. One of the issues the board was considering involved a decision about arming teachers.  The board approved a policy to prohibit firearms in schools, without amending it to arm teachers, so whether from public pressure, legal advice or common sense, it seems that TSD#9 teachers won’t be armed at this time.  This well-researched and well-written statement provides all the information needed to answer the headline’s question.  Thanks Isabeal for sharing this with Pioneer readers.

Teachers bringing guns onto school grounds? I assume this is due to the fact that if there were to be a school shooter, the teachers could whip out their guns and shoot, in order to protect their students. While this is a good idea at heart, and could potentially prevent many fatalities that would come with the potential of a school shooter, we seem to forget some major components that could put students at even more risk. Real-world examples that highlight the dangers of having weapons on school grounds include that even with adequate training and certification, individuals carrying firearms in schools may have the opposite impact of defense. According to statistics provided by Giffords Law Center, a group that investigates policies and strategies to decrease gun violence, more than 70 incidents of weapons being misused in the U.S. schools have been documented in the previous five years. The group analyzes gun usage in schools and categorizes it as “discharged accidentally,” “poorly handled under disciplinary action,” and “used in moments of mental stress or tension.” The center offers case studies throughout the country.

Students in Alabama and California were hit with bullet fragments when their instructors mistakenly discharged firearms while in class. A couple of middle school kids in Missouri took the pistol that their instructor had taken to school. And the mistreatment isn’t limited to teachers. A school resource officer in Florida accidentally discharged a gun while resting on a lunchroom wall.

There are also many impending questions, too many possibilities, and what if’s.  Where would a teacher keep it?  Would the teacher take it with them wherever they went, or take it home?  What if the instructor lost their mind on a kid and drew a pistol on the child? What if a student assaulted a teacher and stole the instructor’s pistol? Would you keep it in a safe? What type of guns are allowed? Who has the right to hold something so powerful, it can take someone’s life, intentionally or not?  What may happen is limitless in terms of possibilities. I believe the bulk of us aren’t too delighted with the concept. If there is truly concern then there are better ways to prevent a harmful situation.

A study looked at 35 mass shootings that took place in the US between 1982 and 2019 and featured perpetrators who lived and were prosecuted. An examination of several pieces of medical information on the mass shooters revealed that 28 of them were diagnosed with mental illnesses. Eighteen had schizophrenia, and ten had additional illnesses such as bipolar illness, delusional disorder, personality disorders, and drug abuse problems. This means that more often than not, a person who decides they want to shoot up a school has a mental health disorder that is not properly being treated, and are potentially suicidal. A way to prevent a kid from becoming a school shooter is by giving them the best mental health resources to our ability. There is also training given to teachers, such as the Alice Training, which has been proven to be very effective.

Additionally, we as a community shouldn’t teach the next generation to know that the only way to solve problems is not by the words we use, but by the weapons we hold. We can’t solve all problems with violence. This creates an unsafe learning environment and there’s a time and place to carry weapons, however a school is a place for learning and education. Guns belong in the forest, hunting for food and killing deer, not children. However a weapon, such as a taser or knife might be better. There are too many risks and possibilities, and we can not afford to have a weapon capable of killing someone accidentally. The possibilities of a gun going off in class, or a teacher misusing it, or pulling it out on someone may be slim and unlikely but so is a school shooting. We could be creating more problems than we are solving and in my personal opinion it is too much of a liability.

There has also been no proof or data supporting the need for this protection, since there is no evidence of threats sent to the school, requiring such extreme change. If that were the case, I and many parents believe it would be better to secure funding for police put on campus, like we have done in the past. Then we would have someone who has been trained, knowledgeable in the field, insured in case of an emergency, and is part of the job description. Teachers go to college, learning how to educate the next generation, not to hold a weapon in their hands, potentially putting themselves and others in danger or at risk. Not to mention if there were to be a school shooter, how would the proper authorities know who to arrest or discover who the true perpetrator is?

Furthermore, this idea could put everyone at risk, and I think until there is actual evidence of a potential school shooter, we should not feel the need to make any rash decisions. However, I think we can all agree that safety is the number one priority, so implementing police officers to patrol the school and protect our students would be an amazing idea to look into! The only teachers who should be allowed to have a gun, is one that has had a previous law enforcement background with an extensive background check, and even that is pushing the boundaries of comfortability.