From: Jack Mulder and Nikki Brown
Suspense, excitement, drama! Overtime, shots at the buzzer, fans on their feet! No this wasn’t March madness. This was YMCA basketball for 3rd through 6th graders. If you haven’t been to a YMCA basketball game this season, you have missed out! The games were full of all of this and more.
As volunteer coaches we witnessed wonderful displays of sportsmanship. Referees called fouls and traveling while also gently teaching these young athletes the rules of the game. Coaches offered tips to players on competing teams. Youth in our community learned how to work together as a team. They began to discern when to pass the ball to a teammate and when to take the shot themselves. They learned when to be aggressive and when to reach out a hand and help another player up. They learned the rules of the game, and the importance of following the rules. What a terrific opportunity for our kids. Thank you YMCA for making this season so successful! 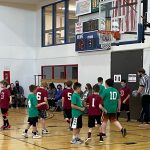 EDITOR’S NOTE: You have a chance to see these teams in action at the championship tournament on Saturday, Feb. 26th at the YMCA. Watch for more information about games and times!