CAPE MEARES — Tillamook County officials say a long-awaited road construction project to reopen a route between Oceanside and Bay Ocean Road will bring benefits for residents and visitors alike.
The estimated $22 million Cape Meares Road Relocation project will add 1.7 miles of new roadway over the cape, reestablishing the Cape Meares Loop that connects Oceanside and Cape Meares. The loop has been closed since 2013, after a significant landslide damaged the road and spurred county officials to close a 1.5-miles stretch situated on an active landslide area.

That closure has left Oceanside and Cape Meares without a second emergency exit route and has negatively affected visitation to the Tillamook Coast. Officials say that constructing a new road will improve safety for the residents in the two small towns while allowing visitors to more easily access popular destinations such as the Cape Meares Lighthouse, Octopus Tree, Cape Meares National Wildlife Refuge and a state scenic viewpoint.
“This project is the perfect example of the alignment between the tourism industry and the needs of our local residents,” said Tillamook County Commissioner Erin Skaar. “This is something we need for those who live there, but also something we want for the people who visit here.”

Not a hypothetical
A large landslide in 2012 and continued slide activity along the road prompted the county to close 1.5 miles of the Cape Meares Loop Road. According to a 2018 grant application for the project, the road has continued to move, shifting more than 15 feet since it was closed.
The county launched a geotechnical study in 2013, shortly after the closure, to determine the best way to reopen the route. The study found that reopening the existing road would be extremely expensive and likely ineffective because of the active landslide movement. Instead, the county should explore ways to build a new road around the slide.
That meant the county needed to identify a good alternate route and find funding to construct a new road — two tasks that can take lots of time, said Public Works Director Chris Laity.
The Federal Highway Administration agreed to oversee the project because the road will provide access to the Cape Meares National Wildlife Refuge, a federally owned and operated reserve. That also makes the project eligible for federal funding, and most of the cost will be shouldered by FHWA.
Laity said the county must provide a 10% match for project costs, or roughly $2 million. The rest of the funding will come from federal sources.
“If it wasn’t for that, I don’t know how the project would have ever been funded,” Laity said.
Additional pre-planning time was tacked onto the project because the new route required negotiations for right of way on multiple privately owned properties. Laity said the road will cross through three privately owned plots, and the county had to work with the landowners (Stimson Lumber Company, Oceanside Water District and Green Crow) to get them to agree to lend land for the roadway.
In the meantime, the necessity of reopening the connection only grew. Landslides closed Highway 131 to Oceanside twice in 2015 and 2016. Bay Ocean Road into Cape Meares also closed in 2015 during storm events. Although logging roads provided very basic, temporary emergency routes for first responders, all three events essentially stranded their respective communities.

“The emergency preparedness groups working there now are under the assumption that if something happens, they’d be isolated,” said County Commission Chair Mary Faith Bell. “We feel responsible to make sure our communities have an egress route, that they have some way to get out in case of an emergency.”
Laity said the real-life experiences residents had in 2015 and 2016 emphasized the need for the road project, as well as garnered support for it.
“When you deal with large infrastructure projects, you will often get a lot of people who are in opposition to the project. In this particular case, there is a significant support for it, because both Cape Meares and Oceanside have been stranded when this road closed,” Laity said. “It’s fresh in people’s memories. We are not dealing with a hypothetical.”

Economic infusion
Beyond the local safety needs, the Cape Meares Loop also supports thousands of dollars in tourism revenue. Since it closed in 2013, visitation to the Cape Meares National Wildlife Refuge has fallen 12%, according to the 2018 grant. That equates to an estimated $280,000 of losses to the regional economy.
Tourism agencies welcome the road project. Nan Devlin, executive director of the Tillamook Coast Visitor Association, said reopening the loop will clear up confusion among visitors. 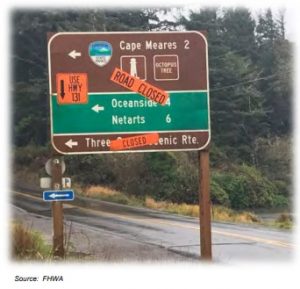 “Although we’ve been referring to the drive as the Three Capes Route, with information about the Loop being closed, for the last 6.5 years, the reference to Three Capes Loop is still in old maps … which travel writers and other reference. In addition, there isn’t any signage other than a ‘road closed’ barrier at the top of the hill at the Cape Meares entry,” Devlin said. “We get lots of queries about whether the entire road along the three capes is closed.”
Restoring the loop also will infuse the local economy with more tourism revenue. When people drive the loop to visit Cape Meares, Oceanside and Netarts, they are likely to spend money at the local businesses in the communities or at the county-owned parks along the route, said Tillamook Chamber of Commerce Executive Director Justin Aufdermauer.
“This is a really important project for Tillamook County that will improve safety for residents and boost traffic to our businesses as more people travel through this area to explore the new addition to the Three Capes Scenic Route,” he said.
FHWA contracted with M.A. DeAtley Construction Inc. to complete the project, which will involve significant earthwork. Crew will begin falling trees along the new route in January, then begin excavating roadway, culverts and retaining walls in the spring. FHWA expects to move more than 250,000 cubic yards of dirt (roughly 17,800 standard dump truck loads) during the roadway excavation.
The project is expected to be completed by October 31, 2023.
“We are thrilled that this is finally happening. 10 years later, we are going to break ground,” Bell said. “Up until just recently … there had always been a few more hurdles. Now we are finally there.”