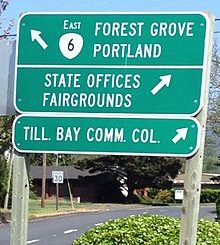 By Laura Swanson
Tillamook County Commissioner Erin Skaar and Tillamook County Sheriff Josh Brown are determined to see some solutions for improving safety on Hwy. 6. There will be enhanced patrols and increase Sheriff’s presence starting this weekend as well placement of the radar trailer.  Reader boards (variable message signs-VMS) are being added as well.

The Pioneer reached out to multiple contacts at ODOT and received immediate replies.  This is from Lou Torres, ODOT Public Information Manager:

We are looking forward to working with Tillamook County, Washington County, legislators and the concerned public in trying to find ways to improve driver safety in the corridor.  But as mentioned in my response above, it will be a challenge since we are dealing with changing driver behavior.

The following response is going out from ODOT to over 30 people that have contacted our ASK ODOT office:

Thank you for writing to ODOT about your concerns over the recent crashes on OR 6 that resulted in fatalities.  We realize that these crashes can be devastating to families and communities.  We care about each and every life lost on our highways and that is why ODOT strives to prevent crashes like these from happening.  We appreciate you taking time to contact us.

We are not just concerned with the recent fatalities on OR 6, we are alarmed about the overall increase in severe crashes statewide.   Even with fewer people driving in 2020, we saw a significant increase in severe and fatal crashes and that trend has continued in 2021. As of July 28, Oregon traffic deaths were 22% higher than in 2020.

While we still don’t know all the details surrounding the three recent fatal crashes on OR 6, we do know that in each one was the result of a vehicle crossing over into the other lane of traffic and colliding with an oncoming vehicle.  These lane departure type crashes are becoming more common and can be caused by a variety of reasons including speeding, distracted and inattentive driving, impairment and fatigue.

ODOT has been trying to find ways to increase safety and reduce the number of lane departure crashes.  In 2016, we installed updated and enhanced curve warning signs along the entire OR 6 corridor.   A significant number of these signs were added to help get motorists attention and keep them focused on staying in their lane. But we aren’t finished.  Our plans are to install rumble strips in the next few years to further prevent lane departure crashes.  These grooves in the pavement make a rumbling sound and cause physical vibration that immediately warns inattentive drivers that they are leaving their driving lane. These are considered for placement on the centerline to reduce head-on and crossover crashes and on the shoulder to reduce run off the road crashes.

Projects that change the road’s cross section, like passing lanes and turnouts, are more time consuming to evaluate, design and build, and are more difficult to fund when considering all the needs on the state highway system.

The other more difficult and challenging issue to address is driver behavior and the poor decisions made by motorists that result in severe crashes.  Aggressive driving and unsafe passing on rural highways in Oregon is more common, along with driver inattention and impairment that are also factors that lead to crashes. As you are probably aware, people are less patient and in a big hurry these days.  This is very much a cultural shift in Oregon and America, and not a good thing. These driver actions are really law enforcement issues, not something that can be easily fixed with engineering. Also important to note, a reduction in law enforcement staff impacts driver behavior.

Know that we share your concerns and continue to monitor OR 6 and other roads.  Thank you again for contacting us.

The community is encouraged to continue to reach out to county commissioners, state representatives and ODOT with your concerns. Watch for more information about a community town hall as well.  Here is a link to ODOT’s “Ask ODOT”
State of Oregon: Ask ODOTHIGHWAY.ODOT.STATE.OR.US