By Ed Ruttledge
Seasonal decorations appeared at the front entrance of Facebook’s drilling site in Tierra Del Mar. Garlands have been strung on the small trees planted between the roadway and the beachfront lot purchased by Facebook for the installation of an international data cable junction. The garlands appear to made of small signs saying, “Keep Facebook Off Our Beach.” 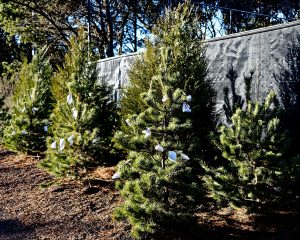 The Facebook project has been fraught with a series of problems. A “sound curtain” was blown over in March. The drill broke in April…, but Facebok failed to advise State authorities of this mishap until June. Facebook was then fined by the State for leaving industrial trash under the
sea and required to conduct a new survey of the proposed drill pathway. Nevertheless, Tillamook County Commissioners have given Facebook the right to return to the site and try again in early 2021.
The project has been universally opposed by residents of Tierra Del Mar. Residents have stated they believe it is not appropriate to accommodate a complex industrial undersea drilling project in a residential community and which is also close to the protected habitats at Sitka Sedge Natural Area.