By Christy Stumpf, Reiki Master and Certified Crystal Healing Practitioner, Cosmic Healing NW
In the last article, I gave a brief introduction to Reiki. It is a form of energetic healing that can help a wide range of illness, from emotional and spiritual, to diseases of the physical body. Many Reiki practitioners talk specifically about how it can help reduce stress levels and calm the mind and body. And this is a great part of its effectiveness. Most histories of Reiki say its roots lie with Mikao Usui, a Japanese Sensei who originally developed his form of Reiki to cure physical illness. Some historians say there were already four different forms of Reiki being practiced in Japan at that time and had been for thousands of years. For a time, Reiki was the main form of medicine in Japan.

After WWII, the practice was almost lost as the US required all healers to be licensed, a condition of surrender. Reiki practitioners went underground. As modern medicine became more prevalent, Reiki became an “alternative”. It was brought to the West by Hawayo Takata, a Hawaiian woman who went to Japan for treatment right before the start of WWII, when she was seriously ill and was told death was imminent. When conventional medicine had no effect, she was told about Reiki. After 8 months of treatment with Reiki, she had a miraculous recovery. Because of her healing journey, she decided to study Reiki as Usui’s protégé and then brought it back to the West. Some of the basic principles, texts, and symbols were lost at this time, and the levels of training were reorganized, but its effectiveness is still prevalent and very useful for physical ailments. Many practitioners all over the world are showing great results treating auto-immune diseases and cancers. Unfortunately, as many practitioners point out, most people come to Reiki as a last resort. Because of this, treatment may be longer, taking much time and patience, which is harder to accept when you are desperate.
According to Usui himself, the purpose of Reiki is to help people fulfill their lives in peace and happiness, and to give physical and psychological health. It is successful in treating psychological issues, such as trauma, or less severe issues like anxiety and nervousness. As I stated in the previous article, all things possess the incredible ability to heal, including plants, animals, trees, and humans. However, in today’s modern world, our natural healing powers are less likely to function effectively. Reiki awakens these natural healing powers which we all possess but are lying dormant and unused. It may take some time depending on the severity of your illness and the length of time you have been sick. There is a metaphor that may be used to explain this process. In a muddy stream, when you look at the surface of the water it looks clean and clear, but when you stir, the mud is brought up from the bottom making the water cloudy. When you remove the mud floating on the surface, there will still be mud that has fallen to the bottom again, repeat the process enough times and the stream will eventually be reborn clean. This is used to explain why an initial Reiki treatment may make you feel worse, as toxins come to the surface, but this is just part of the process. Eventually, your “stream” will become clean and your healing power will be able to come through. Just remember, you CAN live a healthy and abundant life! Cheers to your health! 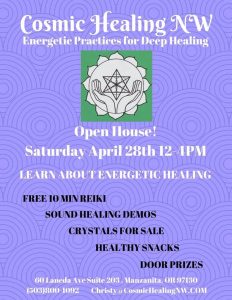