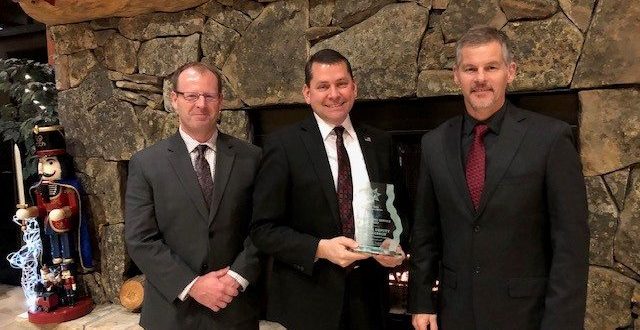 Tillamook County – Tillamook County Reserve Deputy Eric Swanson recently received a Distinguished Service Award from the Oregon State Sheriffs Association. On December 1, 2018, Swanson also celebrated his 30th year in law enforcement.
Swanson began his voluntary law enforcement career when he was sworn in as a Tillamook City Police Reserve Officer in 1998, where he served for 13 years. Swanson joined the Sheriff’s Office in 2001, where he currently serves as a reserve and part-time deputy.

“Eric selflessly volunteers to help cover patrols in high impact areas such as Pacific City during the highly populated busy tourist season, the US Forest Service Sandlake OHV area, and other high traffic complaint areas,” said Sheriff Andy Long in nominating Swanson for the award.
“Eric’s patrol statistics rival those of our full-time staff on many levels and he continues to set very high standards for himself and for the Sheriff’s Office. He goes out of his way to assist other Deputies with calls for service and members of outside law enforcement agencies,” concluded Sheriff Long.
Deputy Swanson works as a manager at Adventist Health’s Tillamook Regional Medical Center. Swanson is also an Oregon State certified EMT-Paramedic, and his medical expertise has proven to be vital to the health and survival of many injured people throughout his time responding to ATV collisions in his patrol area at the Sandlake OHV Recreation Area. Swanson is also credited with assisting the Sheriff’s Office and Adventist Health in coordinating medical staffing within the Tillamook County Jail.
“Deputy Swanson is a true asset to the Tillamook County Sheriff’s Office and is deserving of this prestigious award,” said Tillamook County Sheriff’s Office’s Lt. James Horton. “His commitment to this community is a benchmark I strive for all of our deputies to attain.”