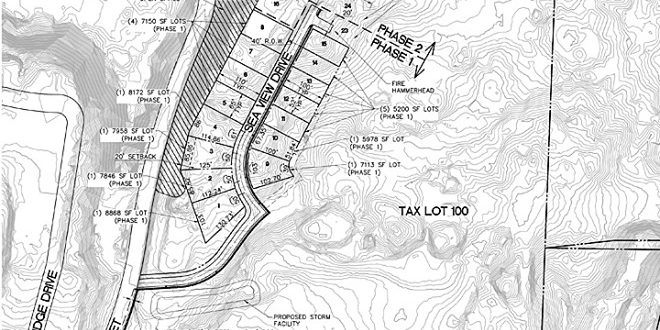 By David Dillon, North County News
Encore Investments LLC, the real estate development firm which two years ago proposed a 70-acre, 280 to 320 residential units development for Manzanita, returns to the Manzanita Planning Commission Monday, July 15 with a smaller initial plan. The meeting, which includes a formal public hearing on the proposal, will start at 4 p.m. at City Hall and is open to the public.

Encore’s original concept – “The Village at Manzanita” — would have accommodated a variety of housing — from cottages to custom homes — plus a small commercial “village center” with general store, restaurant and bakery. A clubhouse and fitness center for owners and guests were also planned.
Monday’s formal public hearing will address a tentative plan for Pacific Dunes No. 8, a 29-lot residential subdivision on a portion of the original 70-acre site.
The site is located between Classic Street and Necarney City Road, generally east and south of Classic Cottages and above the former golf driving range.
The proposed subdivision lies within Manzanita’s city limits and is zoned SR-R (Special Residential/Recreational). According to Encore’s submission, the 29 lots would vary in size from 5,200 to 8,868 square feet each, and be suitable for single family or two-family residences.
The lots would be developed in two phases – 15 during the first year, and 24 during a second two-year period.
Encore’s new submission remains part of a bigger plan for their 70-acre property. According to the Manzanita Planning Commission’s “Findings of Fact and Conclusions” document for the July 15 meeting, “The remainder of Tax Lot 100 may be developed at a later time.”
The initial “Village” plan was presented in June 2017 during a three-hour meeting of the Manzanita Planning Commission before an overflow crowd at the Pine Grove Community House. The “Village” would have covered the site of what would have been the second nine holes of the Manzanita Golf Course.
The ‘Village” plan ran into trouble immediately. A major bone of contention was the developers’ request to exempt all the new residential properties from Manzanita’s 17.5% limit on short-term rentals. When proffered, that specific proposal drew a strong negative reaction from the audience at the Pine Grove.
The proposal to be discussed July 15 has no such proposal.