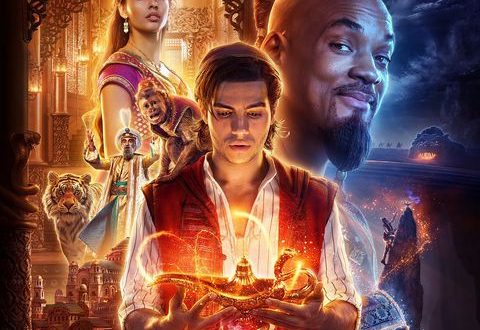 By Andrew Jenck
Many don’t seem to understand just how limitless animation is — any color pallet can be chosen, characters perform more exaggerated stunts, and the “camera man” essentially the angle at which the artists draws. Shots that would otherwise be impossible can be performed that can result in breath-taking cinematography. Hence, the problem with transitioning Aladdin to live action was that the 1992 animated classic is perhaps among Disney’s most kinetic animated film, most apparent by Robin Williams’ Genie. Williams himself even said Aladdin was “a Warner Bros. cartoon in Disney drags,” so approaching the source would be similar to that of making a realistic Bugs Bunny. The filmmakers would then have two options: rework much of the material to fit the new medium and although it may have to sacrifice certain plotlines, could still present its own mark while paying reverence to its predecessor or just more or less make the same movie and go through the motions, banking on nostalgia. Guess which option they picked?

In trying to recapture the look of the original, the sets and clothing are given a very clean, near gritless look; not looking like they’re living in a desert. No matter how much money you throw into the sets, costumes, and special effects, if your director doesn’t know how to properly light it, your movie will look staged and cheap; likely from trying to emulate the original’s vibrant color scheme. The musical numbers suffer the most from this change in medium. They’re shot flat and lack the fluidity of their animated counterparts. Most notably, “Friend like Me” is a CGI mess, and “Whole New World” just has Aladdin and Jasmine behind a noticeable green screen. They don’t even go through “an endless diamond sky” but rather the most generic desert you could think of.
Mena Massoud could’ve been a great Aladdin, but he just feels lost in the role; likely because his character seemed of least importance compared to all the others. Naomi Scott makes a star-studded presence as Jasmine, and I hope this leads to better things for her. Will Smith surprisingly works as the Genie, finding his own voice as a more laid back, chilled version of the character. The weakest link is Jafar, as Marwen Kenzari seemed to be directed to be more reserved version of the character but just lacks any menacing traits.
There are some changes made to story: most notably Aladdin becomes more obsessed with power in his position as prince and Jasmine wishes to rule for her people. Unfortunately, these characteristics are merely told and spoon-fed to us without having any real bearing on the story. Normally, I’d chalk this up to poor screenwriting, but I actually think this was done intentional. If they did focus more on these ideas, then it would require the filmmakers to drastically change the narrative, and the producers are much more concerned with pandering off of nostalgia. Other changes include Jasmine has a best friend but is superfluous and ultimately serves as the Genie’s love interest. Plot holes from the original are “fixed,” but the remake just makes new ones (i.e. why doesn’t Jafar just hypnotize Aladdin to bring him the lamp?) Jasmine gets her own song but sounds, and shot like, any other music video tweens are listening to today without even trying to fit in with the rest of the soundtrack.
Alright, I’ve put this off long enough: is blue Will Smith as bad as from the trailers? Yes. In fact, Genie’s true form is symbolic of this remake. The design overproduced yet still feels too simple for a live action setting. Attempts are made to capture the frantic pace of Williams’ portrayal but just feel limited. It tries to capture the look and feel of Aladdin but fails miserably.
It can’t be judged on its own merits because it refuses to do so, the film is made just to remind people of a childhood favorite, or for any detractors to win them back by addressing their complaints on a surface level basis. Aladdin (2019) is not a bad movie because it is calculated; I’d argue the original was calculated in many ways. It’s bad because it lacks efforts. There is no attempt to create a whole new spin and any reverence paid is surface-level pandering. Despite what I’ve said, the film is actually watchable, but the mindset behind it makes me bitter towards the whole enterprise.