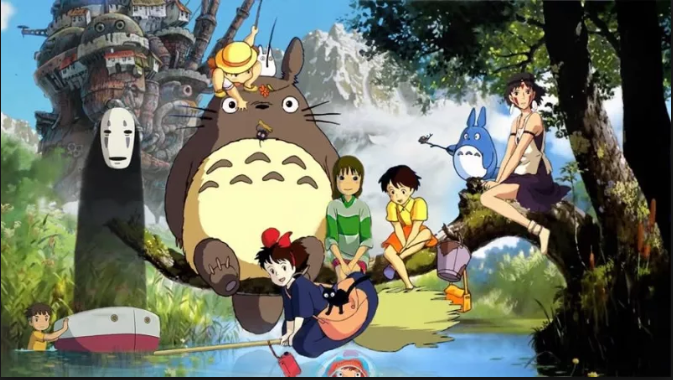 By Andrew Jenck
You may not have seen their films, but you may have seen their merchandise in one corner of a Barnes and Noble or on a T-shirt worn by teens to college-aged women. Studio Ghibli (pronounced “Jeeblee”) is a renowned anime movie production company located in Japan, helmed by director Hayao Myazaki. Their films are incredibly immersive, creative, and filled with timeless characters to the point where they can appeal to even those unfamiliar/uninterested in most other mainstream anime. I feel this studio should get more attention from casual audiences, so here are short reviews of the films I feel are best to start out with.

SPIRITED AWAY—The first one you should watch first.
Spirited Away is the best of Ghibli’s films that I’ve seen. Largely seen as a Japanese Alice in Wonderland, the film follows a young girl transported into a spirit world where she must serve the head of a spa company and find a way to save her parents. Along the way, she encounters colorful characters and all sorts of strange, imaginative scenarios. The film provides many memorable locations and sequences that it’s almost hard to keep track. The world feels small yet well established to the point where you’ll find yourself lost in.
MY NEIGHBOR TORTORO—The most iconic.
You’ve probably seen a blue bunny-like creature, and this is where it comes from. Two little sisters move to the countryside where they notice strange creatures in their backyard only to come across an animal named Tortoro who poses magical powers, and that’s about it. Ghibli is known for making more relaxed, slower paced films that don’t necessarily have a villain but rather showcase a group of characters’ lives throughout a particularly time frame. While I don’t share the same sentiment that this is one of the best animated films ever, it is a very charming, nice film that’s perfect for family movie night. The laid-back atmosphere and calming colors make Tortoro the cinematic equivalent of a Sunday afternoon hike, and if you’re into that sort of thing, you’ll enjoy this thoroughly.
KIKI’S DELIVERY SERVICE—Tortoro, only better.
This film shares similar qualities with Tortoro but I feel is handled better; largely because the main character, Kiki, is more relatable and fleshed out. The film is one of the best coming of age stories I’ve seen about a teenage witch who trying to find her place in the world and gets a job in a new city. Kiki develops more so than the sisters from Tortoro largely because she’s older and is going through a more complicated phase of her life. The film isn’t as magical as some of their others, opting for a more grounded tone but works to their advantage allowing for a more personal intimate story. Plus the late Phil Hartman voices Kiki’s cat who provides the film’s biggest laughs.
PRINCESS MONOKE—Less cute, more action.
Whereas these other films can be watched as a family, Princess Monoke is definitely one to put on when the kids are in bed. What would easily be R-rated in a live-action film, Monoke shows the more graphic, adult side of Ghibli that you won’t find in any mainstream Western animation studios. A young boy comes across a camp that plans to expand its civilization and operations across the forest where spirits and spirit-raised human named Monoke reside. The premise sounds like any other preachy environmental film, but in execution, provides a grayer story. Every character, including the humans, comes from a relatable place; motivations and reasoning are fleshed out. And while other films may glorify nature, Miyazaki gives the forest spirits flaws and shows how their methods can be too extreme also. The film also takes its time to appreciate nature with a beautiful setting that demonstrates an artistic but tangible view of what nature is.
So those are films that you should add to your watch-list. Unfortunately, Ghibli’s work is unavailable on Redbox and streaming services, so I’d recommend you either rent some Ghibli films from the library or attend Ghibli Fest. Ghibli Fest is where Regal Cinemas re-releases Ghibli’s most iconic films in theaters for a weekend across the last half of each year. You can look up the event online to see the schedule and find participating theaters in Portland.