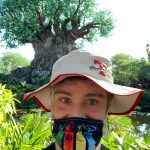 I’ve discussed how a film can immerse its audience with a variety of techniques, but how do you bring that same immersion to real life? How do you give the audience their own story and the freedom to write it? Theme parks answer these questions and more by taking the fundamentals of cinema and creates their own art form. This month we’ll analyze how the Orlando parks achieve this artistry.

The youngest gate of Disney World is an odd beast (no pun intended). In many regards, it’s best of the resort with its immersion, variety, attractions, and meal options firing on all cylinders, with one exception. Dinoland USA, themed around the animals of yesteryear is unusually cheap for a Disney Park, on par with a county fair. Whereas the other areas immerse guests in exotic continents and an outer world, Dinoland lacks the details that the imagineers mastered, and holds back what could otherwise be the best theme park in the States.
Upon Animal Kingdom’s opening, the Walt Disney Company lacked the market power and finances it currently has today. Budget cuts hindered the park, as Dinoland was reduced to a collection of cheap carnival games, generic spinners, and one impressive dark ride simply titled Dinosaur! The latter attraction takes guests on a mission to save a dinosaur before the comet hits while outrunning a carnosaur. What’s supposed to be an advanced research facility, however, guests will feel like they’re on a grade school field trip, as the queue is nothing more than small fossils and a few paintings.
Compare this to the other pavilions, and the errors become more staggering. Pandora: The World of Avatar feels unearthly. The greenery and structures give the illusion of an alien planet beautifully. The main attraction, Flight of Passage, will usually require a wait of at least 90 minutes but the experience makes it worth every minute. Building on the foundation of Star Tours, guests feel as if they are gliding on the alien flyer banshee, traversing through lush scenery by ride technology that matches the footage perfectly. Even if one is not a fan of the film or most motion simulators, it is a highlight of the park. Pandora also had budget cuts, its boat ride is too short and features just one admittedly stunning attraction while relying on screens, but they also make floating rocks look realistic.
From the north exit of Pandora, guests can travel the Africa and Asian pavilions. The former feels like an authentic experience, complete with cultural music and the safari that allow spectators to view real animals. Asia’s highlight is Expedition Everest, a more thrilling version of the Matterhorn with a queue that Dinoland should’ve strived for. It’s made up of Nepalian artifacts and pictures of the locals all while building up the Yeti as a mythical creature, making their encounter with him on the ride more fulfilling. Imagineers were unable to achieve immersion through this detail, so they tried to become creative. Tying all the pavilions together are the theme of conservation and immersing oneself in nature. The backstory of Dinoland takes a metatextual approach where the founders capitalized off their fossil by building a tacky carnival, showing how we take nature for granted. While this may be a clever workaround, it still feels like an antithesis to rest of the park. The immersion ends up being a lack of immersion.
Animal Kingdom demonstrates both the limitless possibilities and limitations of theme parks. The rest of the park more than makes up for Dinoland’s shortfalls, entertaining guests through different ride technologies and scenery but there is a sense of incompletion. Dinosaurs should be present in the park, to better emphasize what was lost and how Earth is everchanging. If the imagineers can refurbish the land, then Animal Kingdom can be the wholistic experience it has the potential to be.