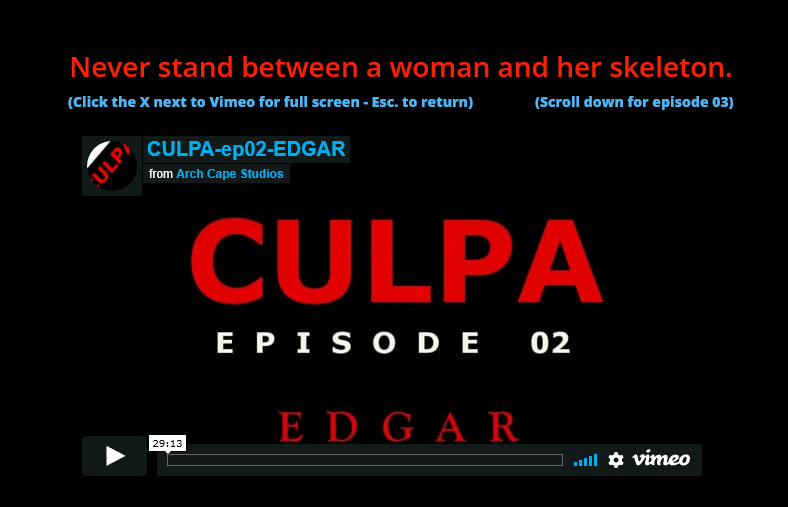 EDITOR’S NOTE: Arch Cape Studios’ CULPA episodes feature familiar coastal scenes, and many local actors, filmed in 2014 by Drew Reid, we thought it would be fun for the Pioneer’s Drew to review a local film production.
We have included the link to the CULPA episodes at the end of the story.

By Andrew Jenck
Culpa is unique from other titles I’ve covered on Drew’s Reviews: a web series made by local filmmakers on a small budget, gorilla-style. Production Company Arch Cape Studios released this miniseries five years ago, and the first three were brought to the attention of me by my employer. I went in with more subdued expectations considering these factors, but I did find myself genuinely surprised by how invested I was in the story.

Following a private investigator named Ronny Glasswell in his cases, the episodes each have a different storyline but with one major through line as is the case of most TV shows. We meet characters with different backgrounds, including lawmen, reporters, other detectives, and relatives of the people in question. This adds a greater scope to the story and makes the world more lived in, including many residents of the community. The focus changes dramatically at one point that I was surprised they took, especially from a small-budget production
The film for its budget looks adequate. Slightly more advanced tech would’ve been appreciated to put the series in HD, and with its reliance on natural light does look a bit amateurish, but is only an issue in nighttime scenes. It’s easy to just do a shot-reverse-shot whenever characters are talking, but instead the director varies everything to keep it more visually interesting. Editing could use an improvement, however. The footage will stop for a second before fading into the next scene sometimes whereas other scenes transition fine. The acting can be a bit forced and egged in, though everyone does seem to be committing themselves admirably. Ronny is played by a farmer near the studio, for example. It’s clear that these people are doing their best almost akin to children giving their hearts out in a school play.
There is charm to these smaller budget productions, where they are making the best with the tools they have at their disposal. Culpa isn’t trying to bank off your money, it is a genuine effort to entertain you and pull you into the story. On those fronts it succeeds, concerning the first three episodes and I look forward to watching the rest.
http://www.archcapestudios.com/c-u-l-p-a
CULPA: From Astoria to Portland to Short Sands, the film unfolds the tragic story of a hidden secret. The film is 5 years old but is still relevant because the story is original, the cast and crew are local and the Oregon coast is always fresh.