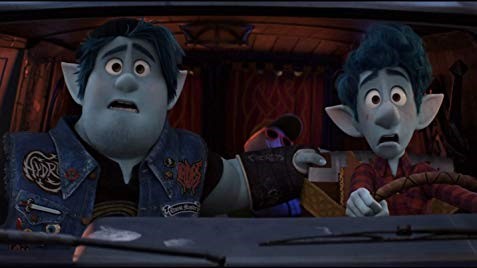 By Andrew Jenck
Onward has good pacing, nice character dynamic, and one emotionally mature moment at the end; overall a decent family film from Pixar, even if it’s not on par with some of their previous films. Once again, film criticism is back to repeatedly ponder why Pixar’s track record isn’t as strong as seen in the early 2000s. I’ve read and seen so many articles and video essays that criticized the overabundance of sequels, and that surely if Pixar produced more original films, the studio would relive its glory days. Such an analysis, however, is shallow at best, and as with most issues, the solution is much more complicated and nuanced.

Few people realize how young Pixar Animation Studios is comparatively. Whereas Walt Disney Animation Studios is in its 96th production year and has gone through dozens of different studio heads, Pixar is only 34 years old and, up until recently, had always been led by John Lasseter along with the rest of the Brain Trust: Pete Doctor, Andrew Stanton, Lee Unkrich, and Brad Bird. Most of them have been with the company since the release of the original Toy Story and have crafted a formula that Pixar has used as many times as its Disney counterpart has with its princess fairytales. Save for a few exceptions, Pixar films generally focuses on two contrasting personalities who go on some sort of road trip, only to discover a different viewpoint that improves their dysfunctional world/lives.

Formulas aren’t inherently bad, as they can be a good building off point for creativity, but an overreliance on one can prevent experimentation. Both Brave and The Good Dinosaur, two original films, were infamous for their troubled production with the Brain Trust stepping in and replacing the original directors. The original visions possibly were flawed enough to cause great concern, but the final products were cluttered messes, showing the same process that saved Toy Story 2 can’t be applied to all projects. Brenda Chapman, the original director of Brave, criticized Lasseter for micromanaging and said that Pixar didn’t allow people “to butt heads” often enough to create more brainstorming sessions and unfortunately it wasn’t the only case of Lasseter’s excessive control.

This may be uncomfortable to some, but Lasseter’s misconduct towards his female employees should be addressed in discussing Pixar’s management. While his actions may not have been as heinous as Harvey Weinstein, his heavy drinking, inappropriate touching, and kissing on the lips does not make for a healthy environment for employees to thrive, especially in an industry that has historically not been kind to women. Graphic designer Cassandra Smolcic’s career, for example, was hindered and she couldn’t fully participate in the process because Lasseter “[had] a hard time controlling himself around young women.” Management sets the tone at the top of the company; hence other employees would demonstrate similar behavior to their female coworkers, and management would criticize the women’s performance or force them out of the studio.

Continuously producing sequels is a problem, but it’s only a symptom of a much larger issue. By relying so heavily on a small group of aging filmmakers, restricting the process to an established formula, and having a hostile environment to certain employees, the once infallible animation company has shown a lot of fault beyond just milking established properties. Much of the competition has surpassed Pixar in the last decade with The LEGO Movie, Spider-Man: Into the Spider-Verse, and the How to Train Your Dragon series, all of which were based on preexisting ideas.

Fortunately, Pixar seems to be aware of these issues. Lasseter has left and Pete Doctor has taken his place. The studio launched Sparked Shorts, a Disney+ series of shorts that gives an opportunity for people from all of Pixar’s departments a chance to make their own shorts. The director of one of these shorts considers the project more creatively free, requiring less of a “rigorous process of Brain Trust meetings” for the theatrical films and shorts. The shorts may require less time and money, but they tackle more mature themes, such as having a kid with disabilities, the struggles of immigration, and even women in a male-dominated work force. Pixar’s theatrical release schedule is currently unknown, following this year’s Soul, but this is a very good start. Creativity is more than just new ideas but new approaches and thinkers as well.

If you would like me to review a movie, send your request to jenckad@gmail.com.