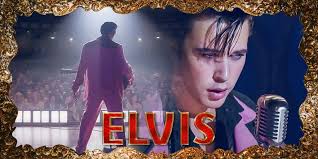 By Andrew Jenck
A common challenge with biopics is condensing the public figure’s entire life in two hours. Although cut short, Elvis Presley’s life was complicated and messy, so a film adaption needs some sort of anchor to build the script around and create something meaningful. Baz Luhrmann’s Elvis does this, to some extent, by placing the Colonel as the point-of-view character seeing how he exploited Presley, though still feeling a bit cluttered, working in the time period and Elvis’ personal struggles. Nevertheless, Elvis is effective in presenting a life lost too soon and the fear of being forgotten. Pairing Luhrmann’s exploitive direction with Elvis’ bombastic presence proves to be an effective enough piece that, although messy, ends up being fitting for such a wide career. Whenever lacking enough substance, it presents what it has in energy filled way.

The first half sees Luhrmann unhinged. If you have seen Moulin Rouge or DiCaprio’s The Great Gatsby, you’ll know what to expect: constant zoom ins, more crazy transitions, and modern music playing in older times. Occasionally obnoxious, such style does match the youthful energy possessed by a teenage Elvis beginning his career. Hearing modern music in the fifties is jarring though, as the sequences progress, they begin to work with the cinematography concurrently to establish the inspirations of the music and so forth. A glaring issue is the script in this section feels like a series of bullet points, establishing Elvis’ family relationships, film/music career, and run-ins with state officials. Sequences feel sped up only to pause for a minute to have some intimacy, as if the film is sprinting on the treadmill and takes a break. The first half is entertaining, especially seeing Elvis disobeying orders from a racist government. The emotional moments just could’ve had more weight if given more time.
Consequently, the second half does that, focusing closer on a shorter time span with more cohesion. Luhrmann felt his style may not have worked well for an older, more world-weary Elvis, but still shoots the scenes in more dynamic ways. Possibly the best sequence is Elvis going against Colonel’s plans for a Christmas special, resulting in the release of “Why can’t I Dream?” involving sets that feel lifted out of the 60s, intense back and forth in the pursuing chaos, and the performances. Austin Butler captures the anguish, fears, and dread beautifully, taking a character mimicked constantly and creating something so human. Living through such a changing world and coming from harsh background, Butler brings Presley’s fears of being lost in the chaos, he can’t get anything stable.
Whatever Elvis the film lacks in narrative originality, it makes up in raw emotions and visceral storytelling. Even if I didn’t gel with all the creative choices, I could at least respect them. I can’t call this a definitive telling of Elvis’ life, but it is a very energetic one. In some ways that is fitting for a life of Presley: convoluted but with an ever-looming sadness to it.